Even as the pandemic continues to cast its shadow of stress, Zee TV is attempting to lighten up the country’s collective mood by offering its viewers an escape from all the stress via the route of rib-tickling comedy through its reality show, Zee Comedy Show. While the show has helped every Indian family unwind on their couch with some of India’s top comedians making them LOL their stress away, this weekend, we will see the popular Bollywood actress Juhi Chawla entertain us with her interesting anecdotes and witty responses as she appears as a special guest during this Saturday’s episode. While her effervescent personality and killer dance moves are all set to mesmerise the audience, it will be the ten comedians of Zee Comedy Show who will come together as Team Hasaayenge to make each one of us laugh out loud. 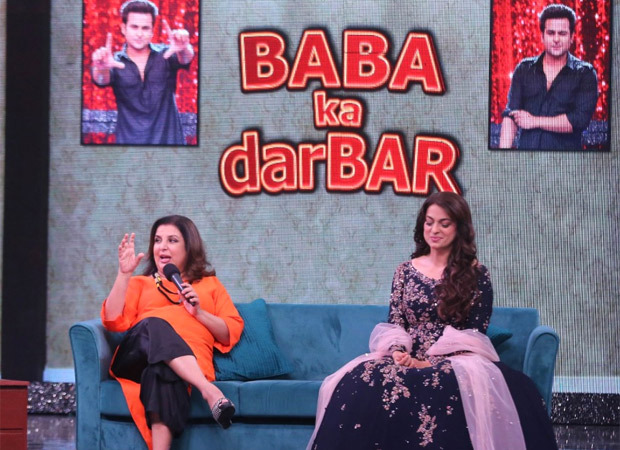 While the hilarious acts put up by all the comedians coupled with the witty reactions and comments of our Laughing Buddha Farah Khan left everyone in splits during the shoot, it was the latter’s surprising advice for Shah Rukh Khan that made everyone ROFL. During the Baba ka DarBAR act where Dr Sanket Bhosale (in Sanjay Dutt style) conducted a chat session with Farah and Juhi, Sanket asked Farah to reveal one thing about Shah Rukh Khan that she doesn’t like. While mentioning SRK’s habit of coming late on set, she also gave him laugh-worthy advice.

As Farah Khan mentioned, “We all know that when we have a 9 am call time, Shah Rukh will come at 2 pm, but that’s fine. However, when he suddenly comes in at 11 am, things go for a toss. Sab gadbad hojata hai and we have to then change things around. So, I feel late aa rahe ho, toh consistently late aao.”

Juhi also added, “Whenever there is a party at our house, we always invite Shah Rukh Khan. I’ve worked with him in several films, and he is also a partner in our sports team, so we always call him home. During one party, I had called him, and everyone was excited that he was coming, especially my staff because they wanted to take pictures with him. I had told him to come by 11 pm, but he had mentioned that he would come slightly late. Eventually, he came after around 2.30 am, by the time which the staff had left and I had slept. The food was also over, everyone had gone home and that’s when he came.”

While the Baba ka DarBAR act and Farah and Juhi’s candid confessions will surely grab your attention, you cannot miss the comic acts by all the artistes of Zee Comedy Show during this weekend’s episode.