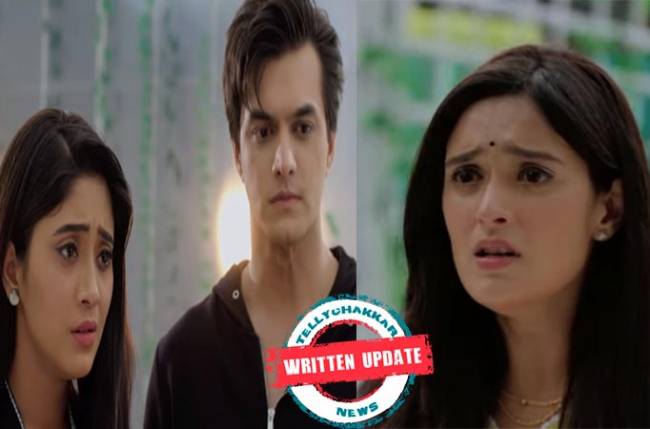 Naira tells Vedika deal was valid only if you have given a kidney to me. She gets angry

He shows reports and proof to  Vedika.

Vedika tries to confront Kartik Naira but fails. Manish and all the Goenka family were shocked to know that vedika was behind all chaos.

Kartik said you paid Umesh Gupta (person who donated to Naira) and they gave money to tell truth.

He further adds incidence that happened when they were at Singhania Sadan. Kartik told the reason behind him getting anger

He also tells vedika that Naira was not ready to tell him the truth. She said that she was lonely and she had done many good things. Kartik tells Vedika that do u have any point or any reason justification you don’t have any right to call us cheater.

Vedika tells Kartik that you are not allowed to do this because I am your legal wife Kartik confront her no because you have already signed divorce papers yesterday. Vedika goes in flashback remember Kartik took her signature on some paper.

She is shocked when she realized that she signed divorce paper.

Vedika blames Kartik how could you do that to me I didn’t expect this from you.

Naira says when things don’t work your way, you have to make them work according to your wish

We gave you enough time, to accept your mistake but you didn’t. Kartik tells Vedika that I decided to expose you in front of everyone but Naira stopped me she told me even if she is wrong but she is not a bad person she has done many good things and loneliness is the worst thing in the world which can make you feel very bad.

Kartik tells Vedika that you ask for divorce we didn’t even mention that. If you would have accepted your mistake went away then maybe we wouldn’t tell anyone in the family. But instead of accepting you were doing something else. Lying, betraying so we decided to take such steps. We were trying t ok avoid this step but you forced us to do that. Dadi supports Kartik Naira

Vedika gets angry and tells that stop saying this I am feeling guilty she request everyone to punish her Dadi tells her to go and stay away and start her new life and try to be happy.

Before leaving Vedika tells Kartik may God keep you happy and no one can separate you as I did. Vedika leaves.

Kairav is happy because his mom and dad are getting married. Everyone is excited, Dadi worries that auspicious time is just for 27 mins we have to hurry up where is everyone.

Kartik Naira happily dancing because they are getting married.

Kartik Naira says that there will be no problem this time everything will be proper.

On another hand, everyone gets worried because the monkey ate all the food.

Naira and Kairav reached mandir and waiting for Kartik.