Please Like Us!!!
DesiGoogly > Watch: Akshay Kumar and Rohit Shetty run away from Katrina Kaif as she records their ‘excitement’ for Sooryavanshi promotions

After a long wait, Akshay Kumar and Katrina Kaif starrer Sooryavanshi will be released in theatres on November 5. Directed by Rohit Shetty, the film introduces the third cop from his cop universe after Ajay Devgn’s Singham and Ranveer Singh’s Simmba. With less than two weeks for the film to release, the team has kick-started the promotions for the film. 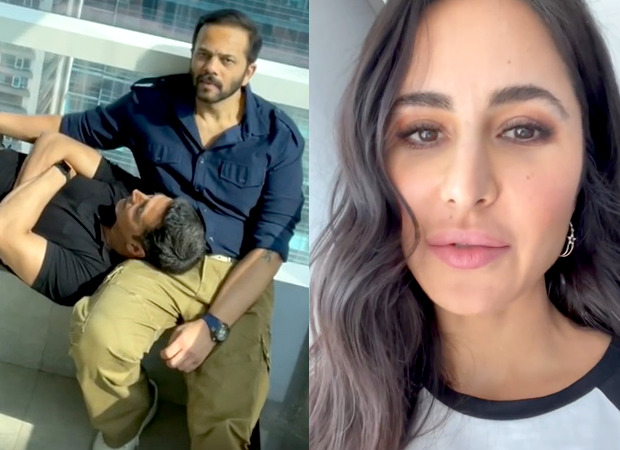 On Sunday, lead actress Katrina Kaif took to her Instagram handle to share a video giving us a glimpse of their first day of the promotion. The video begins with Katrina informing that it is the first day of promotions for Sooryavanshi and said that Rohit Shetty and Akshay Kumar are super excited and thrilled. She then points the camera towards Rohit Shetty and Akshay Kumar who can be seen sitting peacefully in the corner of the room. While Rohit is peacefully looking out of the window, Akshay is seen taking a nap with his head on Rohit’s lap.

When Rohit notices Katrina recording he wakes up Akshay and the two ask her not to record it as it would harm their reputation. To this, Katrina asks, “What reputation?”. The two, run away from Katrina as Akshay hits a chair and falls to the ground.

Sharing the hilarious video, Katrina wrote, “Just look at the excitement of the boys for our first day promotions together.”

Commenting on the video, Akshay wrote, “Waiting for #Sooryavanshi for a year and a half now, a few moments of peace toh banta hai nah! But pranksters like you clearly want trouble @katrinakaif. No worries, #AaRahiHaiPolice”.

Meanwhile, today at the India Vs Pakistan cricket match, the trio will be seen in an interesting segment to promote their film. Just before the match, the trio would entertain the audiences. While the match will take place in Dubai, Akshay Kumar, Katrina Kaif and Rohit Shetty will shoot the segment at the Star office in Mumbai.