Please Like Us!!!
DesiGoogly > “They are my heroes, my numero-unos, my greatest of all blessings”, says Karishma Boolani as she gives a grand welcome to her sister-in-law Rhea Kapoor

Fashion Designer and producer Rhea Kapoor married long-time beau and businessman Karan Boolani on August 14, among the presence of close family and friends at Anil’s Kapoor’s residence in Juhu. Anil Kapoor had posted an emotional post announcing his daughter’s marriage. After marriage both the families celebrated the couple’s wedding bash and Anil Kapoor was seen grooving with Rhea Kapoor on Sonam’s song. Now all the family members of the couple are posting pictures on their respective social media handles. 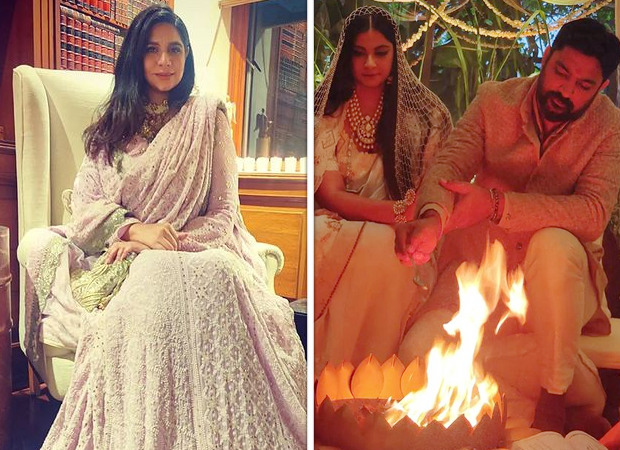 Rhea’s sister-in-law, Karishma Boolani, fondly known as Cookie shared a picture of the lovely pair and penned down a beautiful note for them. She captioned her Instagram snap as, “It is said that love is meant to be a blessing on the world, because it is a context in which two people might become more than what they would have been alone. They become more, not just for each other, but for those around them too. The right kind of love between two people has the power to make the whole world a better place and that’s what @karanboolani and @rheakapoor have always been about. They are my heroes, my numero-unos, my greatest of all blessings”. Rhea and Karan are seen conducting their wedding ceremonies in the picture. Karishma congratulated the couple and welcomed Rhea into their family with a sweet gesture.

Rhea was quick to acknowledge her sister-in-law’s post and replied, “Love you cooks” in her comments section. Rhea Kapoor met Karan Boolani on the sets of her film Aisha where she was the producer and he was an assistant director to Rajshree Ojha for the movie. Loe blossomed between them and they dated for 10 years before finally tying the knot.