Please Like Us!!!
DesiGoogly > Surbhi Jyoti raises temperatures in the BTS video of her song ‘Leke Pehela Pehela Pyaar’

Actress Surbhi Jyoti is known to be selective when it comes to signing a script for a show, film or music video. The ace actress is currently basking in the glory with her several projects getting so much appraise from the audience and turning remarkable. Recently, she appeared as the lead in Zee5’s original film Kya Meri Sonam Gupta Bewafa Hai? co-starring Jassie Gill. The film has been released today on 10th September and is exclusively available to watch on Zee5. 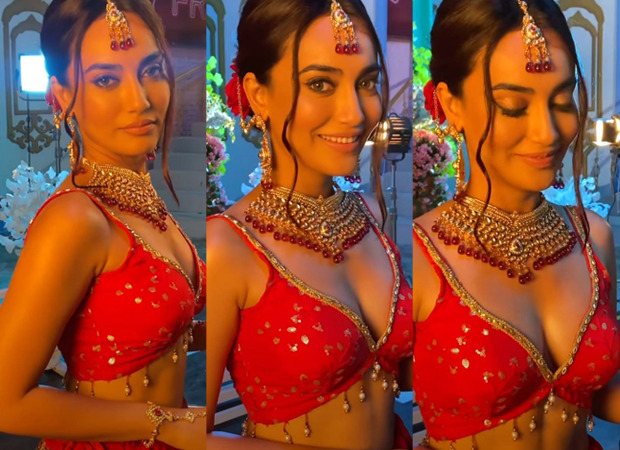 Well, the film also has the remake version of Bollywood’s iconic song ‘O Leke Pehela Pehela Pyaar’ in which the actress can be seen in a very gorgeous avatar. Today, taking to her Instagram Surabhi shared a video in which she showed us the visuals of what was going behind the scenes while the shoot of the song was going on.

Dressed in a pink lehenga comprising a wide flared skirt and deep neck blouse, Surbhi looked absolutely stunning. While the statement necklace and earrings totally went hand in hand with the outfit. While wat stole the show was when Surbhi wore black aviators and gave some killer expressions. Sharing the video Surbhi urged fans to watch her film and tell in the comments section if Sonam Gupta is actually Bewafa?.