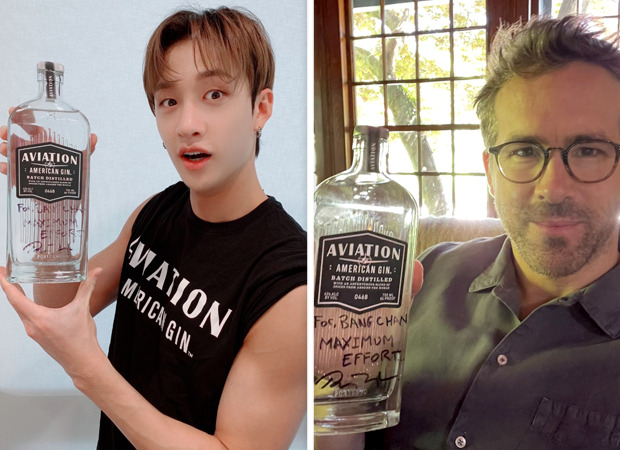 On May 20, the Korean group performed a mashup of their hit song ‘God’s Menu’ and popular female group BLACKPINK’s ‘DDU-DU DDU-DU’ on the Korean show Kingdom: Legendary War – a show that Stray Kids ended up winning in June 2021. The performance was inspired by the movie Deadpool with member Felix recreating some parts of Ryan Reynolds. The set was recreated, decked up with props, and costumes as they paid homage to the superhero film. Interestingly, the leader of the group Bang Chan is a resident Deadpool fan in the K-pop group.

Over the course of the next few days after the performance, several interactions between Bang Chan and Ryan Reynolds took place on Twitter leading to Hugh Jackman getting dragged as well. Now, Bang Chan has received the autographed Aviation Gin from Reynolds – a brand owned by the actor. The K-pop star took to Twitter to inform him that he received his present and that the signed copy of Stray Kids’ album ‘In Life’ is on its way. “It’s here! Thanks for the gift Ryan! The pressies that we sent are on the way too! Hope you like em haha.”

Reynolds was quick to respond in his witty way, “You sent the entire band, right?”

You sent the entire band, right?

Reynolds earlier took to Twitter to show a signed Aviation Gin bottle. “First, I have your autograph right here, Bang Chan,” he wrote. “Will send to you this week. Second, as a new @Stray_Kids fan, can I get an autograph? #NewFavouriteAustralian,” added Reynolds, once again referencing his ongoing feud with Wolverine star Hugh Jackman.

I also have two things.

First, an autograph for you? Already on its way. Along with some other goodies that might suit the Red Suit.