Please Like Us!!!
DesiGoogly > SEVENTEEN embrace the passion in love with nuance and aplomb in Attacca – Album Review

South Korean group SEVENTEEN made a comeback with new EP Attacca which was released on October 22, 2021. Four months since the release of their last EP Your Choice, the self-producing group’s mini-album features seven tracks, each featuring elements of pop rock music. It is a straight-forward and unapologetic take on the emotions of love and romance, with brazen confession track like ‘Crush’, to bittersweet track like ‘I Can’t Run Away’. The EP features a multi-faceted approach to stages of romance and the emotions it invokes. The thirteen-member group stayed true to their tradition where the members participate in the writing and composition of the tracks. Woozi participated in composing all tracks, and writing for all tracks except ‘2 Minus 1’ which is co-written by Joshua and Vernon. BUMZU who is quite often seen in SEVENTEEN’s discography, is also featured in composition and writing. 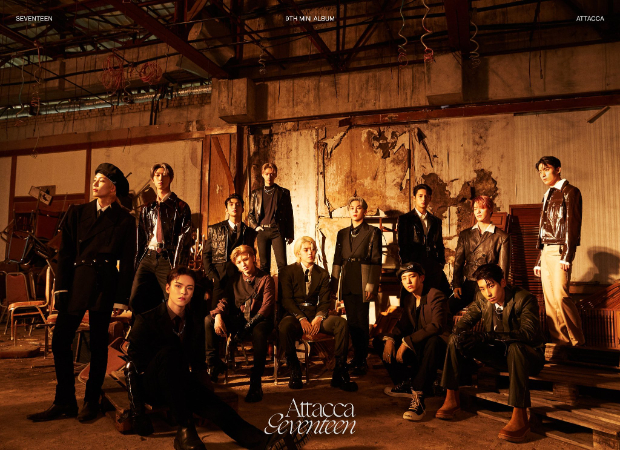 Attacca, SEVENTEEN’s ninth mini-album, is a part of the group’s project “Power of Love” which began in May 2021 with members Mingyu and Wonwoo’s song ‘Bittersweet’, followed by the group’s eight mini album ‘Your Choice’ which was released in June 2021. Let’s take a closer look at the group’s latest music.

‘To You’ is a smooth romantic number. Use of guitar strums, drum beats, clubbed with mild EDM beats; the song is a pleasant listen. It is a classic love song with lovable lyrics and a mood full of love. The sonic music gives a fantastic feel to the song. ‘To You’ serves as the perfect opening track for the album, especially with lyrics like “In a swirling day/ You’ve given me a piece of happiness / You’ve placed all of the smiles in the world in my hands”

‘Rock with you’ is a track that is full of energy right from the moment it begins. The song along with its music video serves several highlights throughout. From Vernon’s vocals, to Woozi’s verse which blends smoothly with The8’s lines, to S.Coup’s ASMR-esque whisper, the song has given the listeners a lot more than just this. Itstays true to the genre of pop rockwith a seamless transition from rock electric guitar strums, and bass synth beats. ‘Rock with you’ is a loud and unapologetic confession of passionate love. The members Joshua, Woozi and Vernon participated in writing the track.

‘Crush’ makes the intention clear at the very beginning. The song is all about having a crush and the feelings it brings along. The lyrics – “I don’t know what to do / Tell me what I gotta do/ Without you, my heart will be stained and melted away” are sultry and unabashed, and the hiphop beats with electro music match the mood perfectly. Vernon participated in co-writing this track.

With ‘Pang!’, SEVENTEEN  begin the subunit songs. ‘Pang!’ is a sound that mimics a gunshot, usually used by kids in playtime or when someone wants to mimic a love shot to the heart. It features trap and hiphop elements, and at the same time features a child-like innocence. This innocence is reflected in the lyrics that go –“The speech bubble’s speech bubble grows / My heart has grown bigger than the atmosphere / I’m afraid it’s going to explode, huh!” The refrain ‘Pang, Pang, Pang, Pang’ is a highly catchy hook. The performance subunit – Hoshi, Jun, The8, and Dino – croon the track. Members Hoshi and Dino participated in co-writing this track along with Woozi, and Dino also participated in the composition. 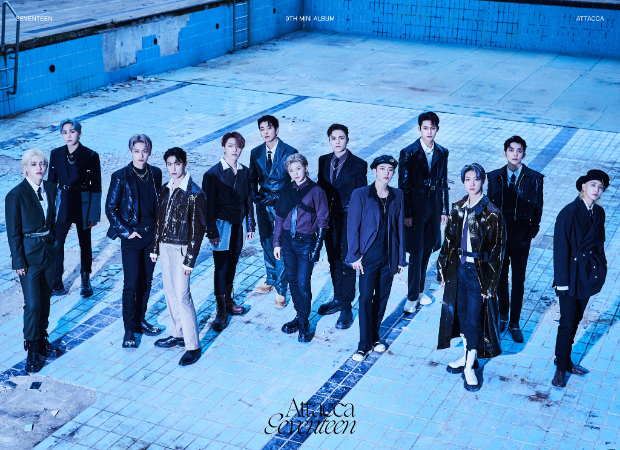 The mood takes a turn towards a love ballad that is laced with high emotion. Even though a ballad, the pop rock elements such as synth bass are not amiss from ‘Imperfect Love’. The confluence of pop-rock with the sombre tones of a ballad creates a musically charged atmosphere. The lyrics are soulful, especially the chorus when the subunit sings “I wanna make an endless story hidden like an old book / Together we become old and worn out.” The vocal subunit – Woozi, Jeonghan, Joshua, DK, and Seungkwan – sang the track. Woozi participated in co-penning the lyrics and co-producing.

I CAN’T RUN AWAY (그리워하는것까지)

A soft hip hop track, ‘I Can’t Run Away’ is soothing to listen. The song is about not giving up on your love and your partner. S.Coups participated in composition of the track, whereas Vernon, Wonwoo, Mingyu participated in both composition and writing for the track. The song comes as a sweet surprise from the Hip Hop subunit, as this track is a shade apart from their previous hot releases.With light acoustic guitar strums, to soft trap beats, ‘I Can’t Run Away’captivates the listener in its magic. The members performed a flawless harmonization which is needed for eloquent lyrics like “If the remains of us dissolve / Will my heart feel at ease?”

The only English language track from the album, ‘2 Minus 1’ features members Joshua and Vernon who participated in the writing and composing the track. This bonus is like a post-breakup narration fueled with arrogance and angst which is reflected in the lyrics – “Two minus one / I’m super fine / I don’t need you anymore”. The duo creates a classic pop rock breakup song and the elements sure pop up in the chorus which is accompanied with a strong guitar and percussion set music.

With Attacca, SEVENTEEN embrace the passion in love in different forms, are unapologetic. While the influence pop-punk rock at the core with genre-playing, the 23-minute EP seamlessly takes you through a rollercoaster of emotions with nuance and aplomb. Attacca is one defining moment in SEVENTEEN’s career and it’s sonically a beautiful album.

Watch the music video for SEVENTEEN’s ‘Rock with you’ here:

ALSO READ: SEVENTEEN wants to ‘Rock with you’ in foot-tapping music video from albu m Attacca