Please Like Us!!!
DesiGoogly > Scuba fan Parineeti Chopra goes into the blue; take a look at what she was doing underwater

Parineeti Chopra is meditating at the moment. What’s going on here? Isn’t she with her brother Shivang Chopra on a seven-day scuba diving trip? The actress is clearly present. And, according to her most recent Instagram post, Parineeti is happy. It’s a video filmed underwater during a scuba diving session this time. The actress is having a lovely time amidst the marine life somewhere in the Indian Ocean. She even makes a hand gesture to express her delight. Parineeti refers to it as her “meditation.” 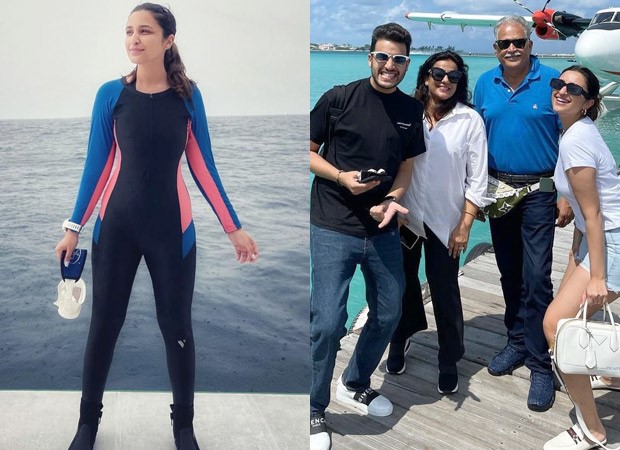 On the social networking platform, the video has received over 2 lakh views. Homi Adajania, a scuba diving instructor and filmmaker, was the first to comment on it. He wrote, “Pure bliss.”

Parineeti Chopra gave us a glimpse of her “in-between dives” look on Monday.  “In between dives. Our boat is now crossing a big channel to go to the next location. Till then, we catch up on sleep, rest, play games and gear up for the big dives.” Before we get to Parineeti, we should thank Shivang Chopra, Parineeti’s brother, for capturing this amazing moment. You might wonder how we know this. We noticed his request for photo credit in his comment.

She wrote, “For the next 7 days, Shivang and I are gonna live on a boat; doing what we love the most – scuba diving. There are 14 other shark chasers here. ???? ???? The phone network is really weak, but I’ll try taking you on the ride with me .. Wish us luck! ???? #Liveaboard #ScubaDiving”

Last week, Parineeti Chopra and her family flew to the Maldives. On Instagram, she posted a statement postcard with a seaplane in the background. “Fam jam, took out our cam. Missing you, stupid boy, Sahaj Chopra,” the actress wrote in her caption.

On the work front, Parineeti was last seen Saina and Sandeep and pinky faraar.

Also Read: Jasmin Bhasin blinds us with her brightness in a shiny gold fringe dress