Please Like Us!!!
DesiGoogly > Sara Ali Khan shares a glimpse of her gaga time at Udaipur

Actress Sara Ali Khan who has been in Udaipur, Rajasthan these days is leaving no stone unturned in making most of her trip to the city. She has been spending some gaga time exploring the beautiful streets, eating famous delicacies and even learning cooking. The actor is quite active on social media and is regularly sharing glimpses of the amazing views in Udaipur. She has been updating her fans about her adventures in the city. Recently, she shared a post on her Instagram where she shared a couple of pictures in which she can be seen chilling by the lakeside 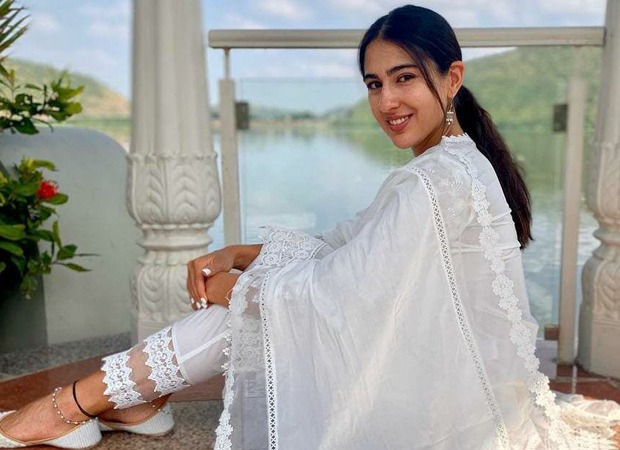 In the pictures, Sara was donning a rich fabric textured white salwar kameez suit along with the same coloured traditional Jhuti (Traditional  Indian footwear). She accessorised her look with subtle oxidised earrings and an anklet. While in another picture, she can be seen sitting on the top of a hill view and wearing a magenta-white Sharara set with some colourful bangles and earrings.

On the work front, Sara Ali Khan will be next seen in the cross-cultural love story, Atrangi Re, alongside Akshay Kumar and Dhanush. Recently, she also finished the dubbing for the film. After this, she will reunite with Aanand L Rai for his next production film titled Nakhrewali.