Ranbir Kapoor’s childhood photos often go viral on the internet. A throwback photo of Ranbir with his mom Neetu Kapoor and sister Riddhima Kapoor Sahni is the latest one to leave fans in awe of this cuteness. 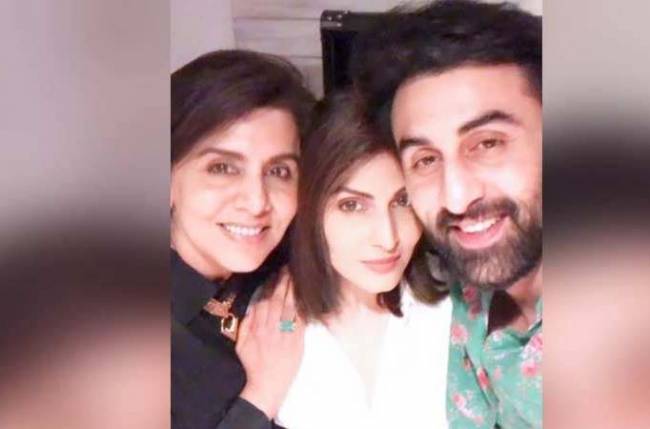 MUMBAI : If there is one star in Bollywood who has garnered a huge fan following due to his work, it is Ranbir Kapoor. With films like Rockstar, Sanju and others to his name, Ranbir has managed to leave everyone into awe of his performance. On a personal front, Ranbir is not on any social media handle. However, his photos keep doing rounds on the same and end up becoming a treat for his fans. Speaking of this, a throwback photo of Ranbir as a kid with his sister Riddhima Kapoor Sahni and mom Neetu Kapoor is going viral on social media.

(Also Read : Ranbir Kapoor’s expressions are unmissable as he is flanked by THESE girls; check pictures)

We all know how close Ranbir is the to his mom Neetu and often, she shares adorable throwback photos of him and Riddhima on her social media handle. Now, a throwback childhood photo features little Ranbir goofing around and playing with his sister Riddhima as they both strike a pose with Neetu Kapoor. Ranbir is seen clad into a white tee with a bamboo shield across his face while Riddhima too can be seen looking cute as a button. Seeing the throwback photo, fans were left into awe of the Brahmastra star. With his tongue sticking out and teasing the photographer, Ranbir looked extremely endearing into the photo with mom and sister.

Post Rishi Kapoor”s demise, Ranbir has been taking care of his mom Neetu with sister Riddhima. Recently, on July 8, 2020, Ranbir and Riddhima planned a small get together for Neetu on her birthday and left her surprised. The photos from the same went viral on social media. into one of the photos, Ranbir was seen giving a bear hug to his mom on her special day. In another photo, Ranbir and Riddhima joined Karan Johar and others in cheering for his mom as she cut the cake. Meanwhile, on the work front, Ranbir will be seen into Brahmastra with Alia Bhatt. The film is helmed by Ayan Mukerji and will also star Amitabh Bachchan, Nagarjuna Akkineni, Dimple Kapadia, Mouni Roy. It is slated to release on December 4, 2020. Apart from this, Ranbir also has Shamshera with Sanjay Dutt and Vaani Kapoor.