Please Like Us!!!
DesiGoogly > Priyanka Chopra Jonas dines out with Awkwafina, Michelle Yeoh, and Sandra Oh, celebrate Asian pride together

All hail the queens from Asia! Priyanka Chopra Jonas took to her social media to share her fun night out in London with the incredible actor Sandra Oh, along with some of the cast of Marvel’s upcoming film Shang Chi and The Legend of The Ten Rings that includes Awkwafina and Michelle Yeoh. Flaunting her Asian pride, our desi girl seems to be having a gala time with the brilliant multifaceted actresses ahead of the film’s global release. Adding to it, Awkwafina also shared her love for our beloved Priyanka. 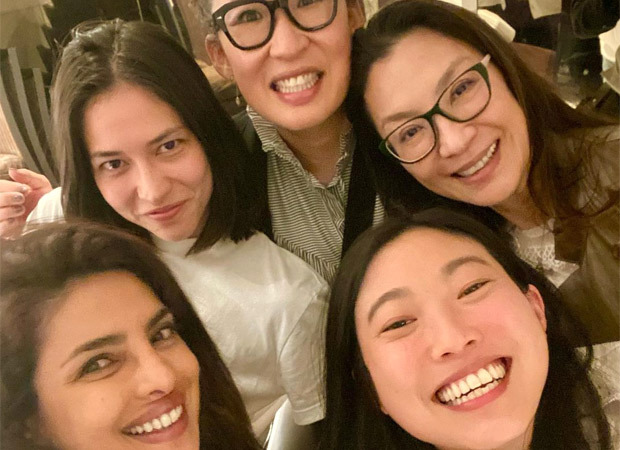 Priyanka Chopra Jonas captioned her picture as, “When u get a seat at the cool kids’ table” along with hashtags Asian pride and queens. She also tagged Awkwafina, Michelle Yeoh, and Sandra Oh in her post. Awkwafina will be seen playing Katy and Michelle as Jiang Nan in the first Asian superhero film for the studio. The film features Simu Liu as Shang Chi in the lead which explores the narrative of a young Super Hero whose journey of self-discovery unfolds in this never-before-seen origins story.

Produced by Marvel Studios and distributed by Walt Disney Studios Motion Pictures, it is intended to be the 25th film in the Marvel Cinematic Universe (MCU). Directed and co-written by Destin Daniel Cretton, experience “Shang-Chi and The Legend of The Ten Rings” in Indian theaters soon.

Also Read: “Some moments are forever”, says Priyanka Chopra as she shares a lovely picture with hubby Nick Jonas