Anushka Sharma is an absolute stunner. Anushka joined cricket husband Virat Kohli for the England tour and has been staying with him with their daughter since June. 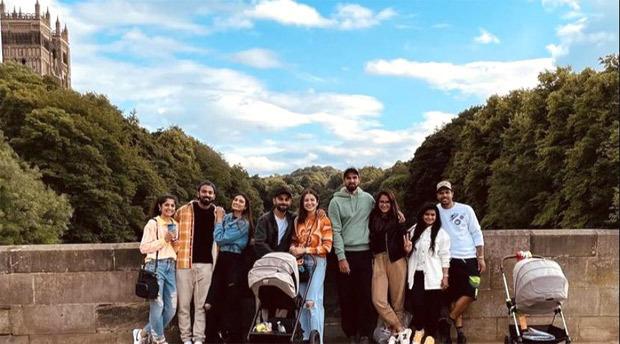 Anushka Sharma and Virat Kohli are living the big life in England with other cricketer families. Sharma has been bonding with all the cricketer wives. They’re hanging out, walking around Durham and making tons of memories before the cricket season kicks off.

Anushka posted a snap on her official Instagram account with hubby Virat Kohli, KL Rahul, Athiya Shetty, Ishant Sharma his wife Pratima Singh, Umesh Yadav, his wife Tanya Wadhwa and the Senior Producer for the Indian cricket team Tanya Wadhwa. They all look radiant and happy as ever, smiling their brightest smiles.

Recently, KL Rahul also posted a snap with his cricketer buddies and the behind the scenes of the picture with all their wives and girlfriends hustling to get the picture right!

Meanwhile, on the work front, Anushka Sharma was last seen in the film Zero in 2018. She is yet to officially announce her next film. She is also busy producing some great content on web platforms including Pataal Lok and Bulbbul.

Also Read: Anushka Sharma is having a hard time sleeping as she can’t get over from ‘Baspan Ka Pyaar’ fever