Please Like Us!!!
DesiGoogly > Parineeti Chopra takes cues from Bridgerton, incorporates Regencycore fashion with her corset midi dress worth Rs. 72,000

Bollywood actress Parineeti Chopra, who is all happy receiving praise for her performance in The Girl On The Train, which released on Netflix. Recently,the actress was seen flaunting her cover looks for Cosmopolitan India for the March edition. 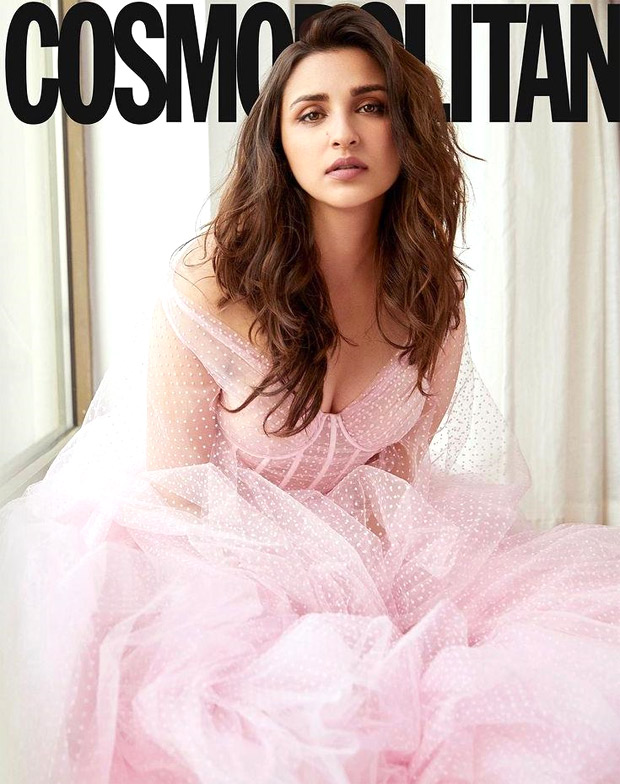 In a series of pictures, the actress looks stunning. In her latest look, Parineeti gives us major regencycore fashion vibes in pink off-shoulder corseted pouf sleeves midi dress by Gauri & Nainika worth Rs. 72,000. The dress has a soft pink white detailing work on the sleeves; she teamed the whole look again with dewy base and nude lips and went with wavy hair. She was indeed looking vision in pink.

In another picture, Parineeti Chopra looked just as bright as a sunflower where she was donning a yellow bowed strapless gown by Tisharth worth Rs.40,000. The gown had a big stand up bow at the front which gave it a quirky look; she teamed the whole look with a subtle nude makeup and went all open with her wavy hair, and we have to say this that she looked absolutely striking in yellow.

The Saina actress went with a mixture of casual and quirky where she was snapped wearing a casual white tee adorned with a orange mesh ruffle skirt by Brinda & Sneha which indeed came up to a good pairing with a casual look she teamed the look with a brown leather belt, she went with a bronze base and nude lips and kept her hair all open, the look was very simple yet subtle and this experimental attire turned out to be a lot classy.

Which look you would like to have it in your wardrobe?

On the work front, Parineeti Chopra will be next seen in Sandeep Aur Pinky Faraar alongside Arjun Kapoor which is scheduled to release on March 19th 2021. Saina, a biopic on the Badminton star Saina Nehwal, releases on March 26, 2021.