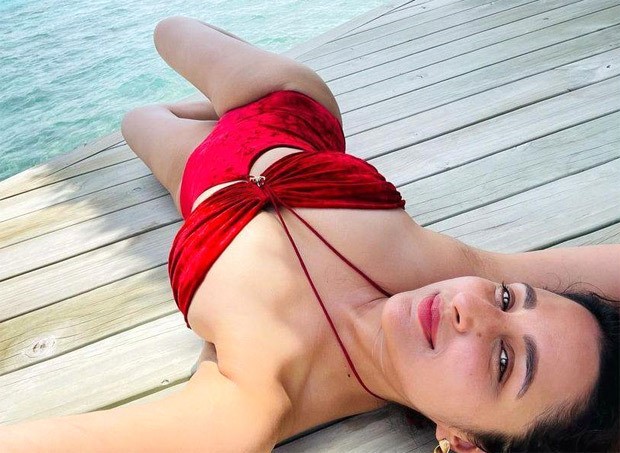 Parineeti Chopra has joined the Maldives bandwagon as she hopped on a flight to spend some quality time with her family for a vacation in the island country. Parineeti has been on  a posting spree. She has been uploading a series of snaps from her vacations showing off her radiant smile and flawless skin.

Parineeti Chopra has been uploading envious snaps on her Instagram. She uploaded a snap dressed in a red hot bikini with pelvic cut outs and a halter neck. She looked sexy as she showed off her curves in the skimpy bikini. Parineeti makes heads turn and sizzles in the Maldivian weather. Her hair is in waves and her face matte with salt in the air and the beachy dew.

Her cousin and global superstar Priyanka Chopra Jonas dropped a comment on the post. “Aha! Inspired maybe?”. Priyanka is referring to a bikini picture she had posted a few weeks back. In the picture, Priyanka had also clicked a selfie from a similar angle.

Parineeti Chopra has had back-to-back films releases this year. Other than the Saina Nehwal biopic, the actress starred in Sandeep Aur Pinky Faraar and Netflix’s The Girl On The Train. Parineeti, who made her Bollywood debut with the 2011 film Ladies vs Ricky Bahl, is best-known for her performances in films such as Golmaal Again, Hasee Toh Phasee, Ishaqzaade and Kill Dil among others.

Also Read: Parineeti Chopra looks cool in white as she spends the day at the beach in Maldives