After successful seasons of Mixtape Hindi and Punjabi, T-Series gears up for its 3rd season of Hindi Mixtape but this time it goes ‘Rewind’. Produced by Bhushan Kumar’s T-Series and presented by Amazon Prime Music, ‘Mixtape Rewind’s first episode that premiers on 30th June will bring 10 beautiful episodes unveiling every week with songs that will make you reminisce the good old 90s and 2000s. 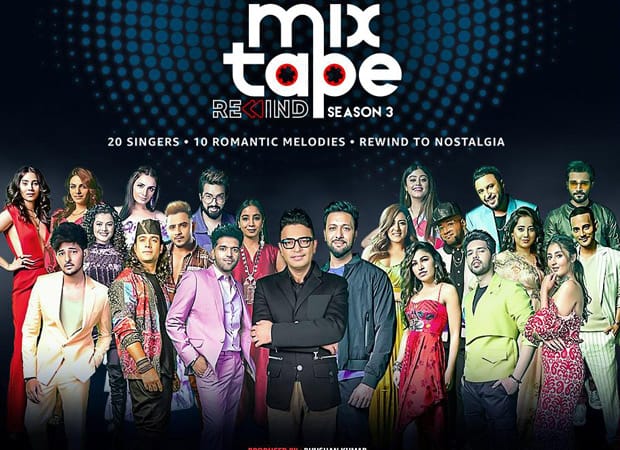 To celebrate the music and launch the trailer, all 20 artists along with Bhushan Kumar, video director Ahmed Khan and music director Abhijit Vaghani went live on the T-Series Instagram page to interact with their fans and take the trailer live. While ‘Mixtape Rewind’ episodes will go live on the T-Series YouTube page every Wednesday from 30th June, the audio of every episode will first be exclusively launched on Amazon Prime Music. The new season will be available exclusively first on Amazon Prime Music for Prime members to enjoy an ad-free and hands-free voice-enabled experience with Alexa.

Ahmed Khan, who directed the first season of T-Series Mixtape, helms the latest season, ‘Mixtape Rewind’. Every episode of this lavishly produced ‘Mixtape Rewind’ will be the perfect amalgamation of 90s – 2000s music which was romantic, melodious and peppy with a modern twist giving it a completely new & refreshed rendition. With composer Abhijit Vaghani along with the team at T-Series – Sonal Chawla, Shivam Chanana, Raj Chanana, and Vivin Sachdeva, who have conceptualized and developed Mixtape, this season is going to bring together Hindi music fraternity’s several young artists to add their charm to the iconic music.

Bhushan Kumar, Chairman and Managing Director, T-Series, says, “We have all enjoyed listening to these songs for the past several years, but this time with a modern twist in Season 3 of Mixtape we have made the same songs that will be enjoyed by the new young listener. 20 artists with Abhijit Vaghani have made this season of Rewind groovier, playful and entertaining. We are thrilled to further cement our collaboration with Amazon Prime Music on this very special Rewind season of Mixtape. I can’t wait for audiences to listen and enjoy these reimagined hits.”

Sahas Malhotra, Director, Amazon Prime Music said, “Amazon Prime Music and T-Series have a shared vision of bringing specially curated listening experiences for our customers and we are very excited to partner with T-Series for the third Mixtape partnership – Mixtape Rewind. The successful and overwhelming response by listeners from the previous Mixtape launches has inspired us to create the Rewind edition of Mixtape; with soulful renditions of iconic songs to unwind to the good old simpler times. This collaboration marks another step in our commitment to serving our listeners with delightful performances by their favorite artists, with all songs launching exclusively first on Amazon Prime Music.”

Director Ahmed Khan asserts, “My team and I have tried to bring on screen all the fun, extravaganza of the songs and camaraderie of all the artists, the music, every instrument, every mood and emotion behind each song. It was fun to shoot with the T-Series team again.”

Abhijit Vaghani, the music director of the season, concludes, “This season of T-Series ‘Mixtape Rewind’ is my favourite one so far. I worked on the songs we have all enjoyed listening to in our yesteryears! I got an opportunity to merge those classic melodies with my new upbeat genres and create a Mixtape for the younger audience to experience.”