Please Like Us!!!
DesiGoogly > On The Sets: Janhvi Kapoor looks thrilled as she celebrates her birthday with the crew of Good Luck Jerry

On her special day, Janhvi Kapoor may be missing the comfort of home as it is all work for the actress this year. Considering the pandemic last year, the actors have been working hard this year to finish their commitments. And Janhvi is currently shooting in Punjab for her forthcoming film Good Luck Jerry. Even though she is away from her family and friends, the crew of her film ensured that the actress celebrates her birthday and planned this cake cutting ceremony for her. 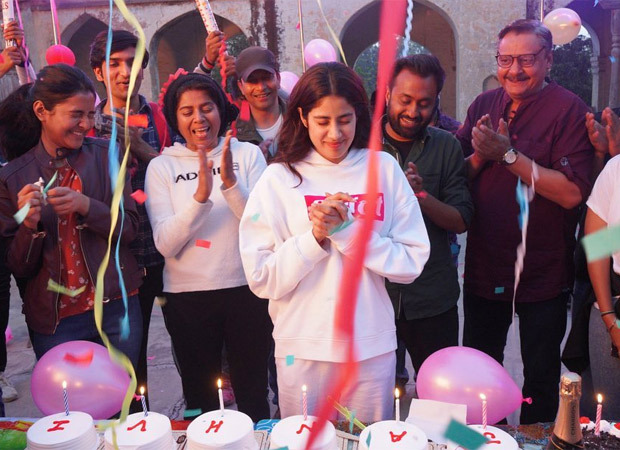 Janhvi Kapoor shared photos from her cake cutting celebration from the sets of Good Luck Jerry and needless to say, she looks thrilled about the arrangements. In the series of photos shared by the actress, there is also a special photo of her with her father Boney Kapoor and also photos of the crew members smearing cake on her face.

On the other hand, many of her family members including brother Arjun Kapoor and cousin Sonam Kapoor took to social media to wish her and share their special memories with her.

On the work front, Janhvi Kapoor is gearing up for the release of the horror comedy Roohi which also stars Rajkummar Rao and Varun Sharma in pivotal roles. As for Good Luck Jerry, the film is a remake of the Tamil film Kovalamaavu Kokila that starred Nayantara as the leading lady. The Hindi version also features Deepak Dobriyal, Sushant Singh, Mita Vashisth among others. It is directed by Siddharth Sengupta and produced by Aanand L. Rai.