Please Like Us!!!
DesiGoogly > Nora Fatehi makes a splash in pastel lime Anarkali suit with a heavily embroidered dupatta worth Rs. 1.25 lakh

Nora is the queen of luxury. She keeps her styling simple and chic with a touch of luxurious oomph. She never fails to stun with her look, her Instagram is fire and so is her daily style. Nora has been out and about in the city making super styling appearances for the promotions of Bhuj – The Pride Of India. Nora is pulling off desi looks these days and we’re all in awe of her beauty. She made yet another desi appearance and now it’s all over her Instagram. 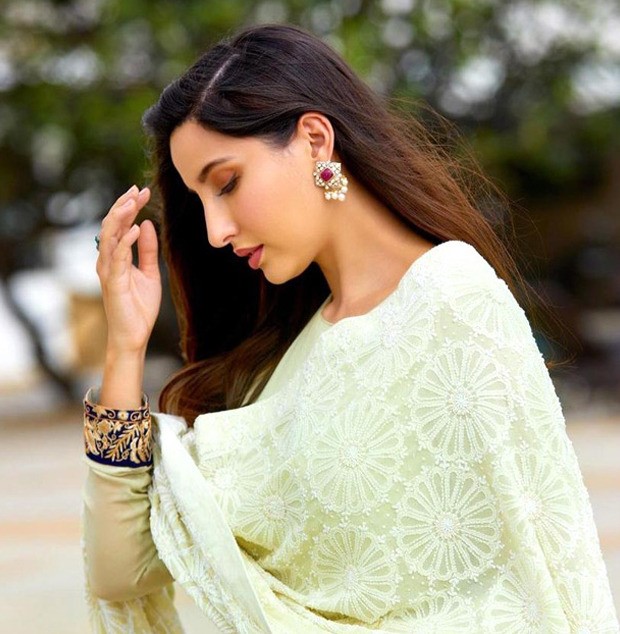 Nora posted a reel dressed in a soft pastel lime Anarkali. The flared dress was styled with a heavy dupatta with intricate white embroidery. The dress featured a backless cutout. She looked ethereal in this stunning piece from Anjula Bhandari. Soft makeup with light jewellery and Kundan jewellery, she looked gorgeous as ever. She wore this outfit from designer Anjul Bhandari’s collection which is worth Rs 1,25,000.

On the work front, she is going to play the role of a spy opposite Ajay Devgn in the upcoming film, Bhuj: The Pride of India. The film also stars Sanjay Dutt, Sonakshi Sinha and Sharad Kelkar in pivotal roles. The film is helmed by Abhishek Dudhaiya and it revolves around the story of 300 women from Gujarat who played a significant role during the Indo-Pak war.