Please Like Us!!!
DesiGoogly > Nora Fatehi had to be carried around on a stretcher on the sets of the music video ‘Dance Meri Rani’; watch

After the humungous success of her chartbuster ‘Nach Meri Rani‘ last year, Nora Fatehi is all set to treat the audience with her upcoming song ‘Dance Meri Rani‘ with Guru Randhawa that has been creating immense buzz for her astounding look as a mermaid. 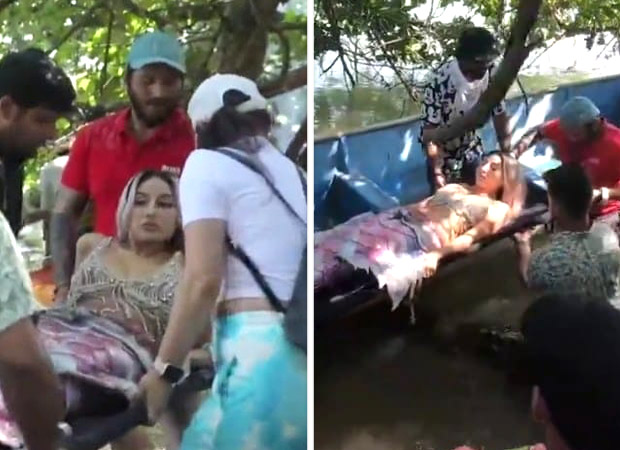 Raising the bar of her dedication and perseverance with each project, Nora Fatehi never fails to impress her fans despite undergoing strenuous shoots for the same.

Shooting for ‘Dance Meri Rani‘ in a mermaid suit, Nora Fatehi was confined in her costume which restricted her movements and had to be carried around on a stretcher by the team. Shooting for the song immersed in water for hours, Nora Fatehi showcased utmost commitment to her art to ace the act.

Earlier, Nora Fatehi has succumbed injuries from bleeding feet to choking marks on neck for her earlier songs. For Bhuj: The Pride of India as well, Nora sustained a cut from a gun on her forehead, however, nothing shook her spirit as she continued to deliver her best for the projects.

Creating a mark as a performer and an actor, Nora has left her imprints not only across the nation but also on a global scale, emerging as an international icon.

Adhering to international aesthetics, Nora has time and again elevated the standards of fashion and art across the world treating fans with entertaining content.

ALSO READ: Varun Dhawan and Nora Fatehi dance off on ‘Garmi’ as they reunite at a wedding in Delhi; watch videos