Please Like Us!!!
DesiGoogly > Mrunal Thakur dons the perfect combination of a lime green top and white cargo pants worth Rs. 15,500

Mrunal Thakur has paved a way for herself with her performances and her sartorial style. Mrunal is quite the fashionista and we love her Instagram style files. 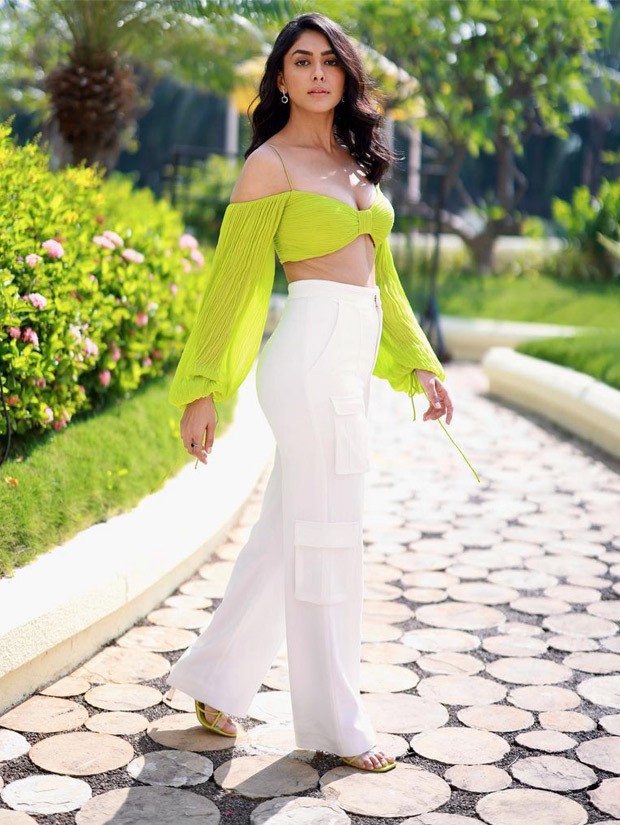 Mrunal recently made a bright appearance on our feeds dressed in a neon green, off shoulder, deep neck blouse with a buckle in the middle. She paired the poppy top with white wide leg pants with cargo pants style pockets. The top featured a low cut, sweetheart neck with sheer, pleated sleeves and fitted wide leg pants. Mrunal’s makeup is fresh faced with a soft smokey and kohl rimmed eyes with a light pink dab on her lips and her hair in side parted curls. She completed the look with neon green strappy heels with pvc straps from Aldo. Mrunal looked like an absolute stunner in this look which costs Rs. 15,500.

Mrunal Thakur started her career as a TV actress and is known for her role in the show Kumkum Bhagya. She then forayed into films with the film Love Sonia which released in 2018. She made her Bollywood debut in 2019 with Super 30 opposite Hrithik Roshan. She was last seen in Toofan opposite Farhan Akhtar. She will next be seen in Dhamaka playing the role of a reporter The film directed by Ram Madhvani also stars Kartik Aaryan. She will also be seen in Jersey later this year.