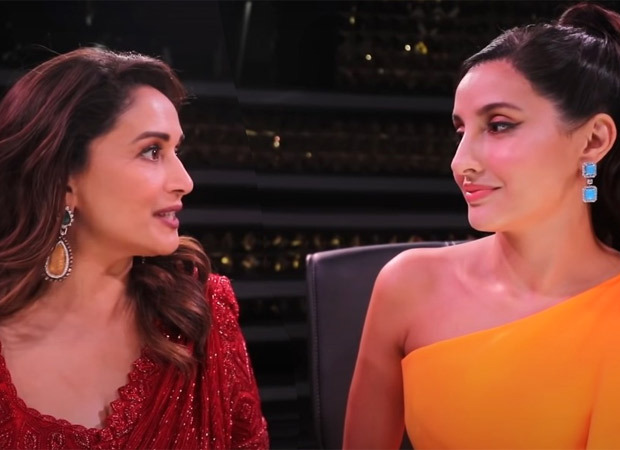 As Nora Fatehi stepped into the shoes of a co-judge for a dance reality show judged by Madhuri Dixit, the performer incidentally shot for the Fan special episode. Nora has time and again expressed her admiration for Madhuri Dixit Nene and has also termed her as the biggest inspiration to join Bollywood.

Reciprocating the fondness, Madhuri Dixit Nene also showered Nora with praises saying, “Dance is something that’s a passion with me and I see the same in you (Nora Fatehi), because it’s a passion for you, your love for dance, and your hardwork, I really commend you for that. It is really difficult for someone, who’s not from here, who belongs to a different country, comes here, makes a name for herself. It’s a lot of hardwork, you have to have that passion. Everytime people put you down, you have to do it, and I see great determination in you.”

Nora Fatehi was extremely thankful to the senior actress for her warmth and love, responding to the same, Madhuri Dixit Nene revealed the reason of the ease in the equation by saying, “I really appreciate hard work, I have seen you, how hard you work on yourself, with every song you do, you want to get that extra element in, and I appreciate that I respect that in you. So wonderful and keep it up!”


One of the most sensational and popular performers of India, Nora Fatehi is known to create her global footprint with a record-breaking streak of success. Hailing from Morocco, Nora Fatehi made her way into Bollywood and is currently ruling the entertainment industry with her power-packed moves.

Earlier, as the episodes of the dance reality show aired on television, offering a treat to all dance lovers, Nora Fatehi and Madhuri Dixit grooved to some of the most iconic numbers of both the divas, including ‘Ek Do Teen’, ‘Maar Daala’, ‘Piya Ghar Aaya’ and ‘Dilbar‘ amongst others.

Known as the aspirational figure across the globe, Nora Fatehi has amassed an unfathomable fan base all over the world with her sheer dedication and commitment to work.

Looking forward to her upcoming release Bhuj: The Pride of India, Nora Fatehi has generated immense excitement amongst the audience to witness her in an all-new avatar with the film, the trailer of which releases tomorrow.