Please Like Us!!!
DesiGoogly > Loved Song Joong Ki in Vincenzo? Here are 7 must-watch Korean dramas and movies of the talented star

South Korean actor Song Joong Ki made his return to K-Drama world this year with the entertaining law-crime drama series, Vincenzo. His hit 2016 romantic drama Descendants of the Sun captured millions of hearts internationally, marking the actor gain international recognition. With over 13 years of experience in the acting game, there’s obviously so much more for fans to explore with the actor’s performances in various dramas and movies. The actor turned 36 in September this year, and clearly it’s been a wonderful year for him with Netflix’ Space Sweepers and Vincenzo. 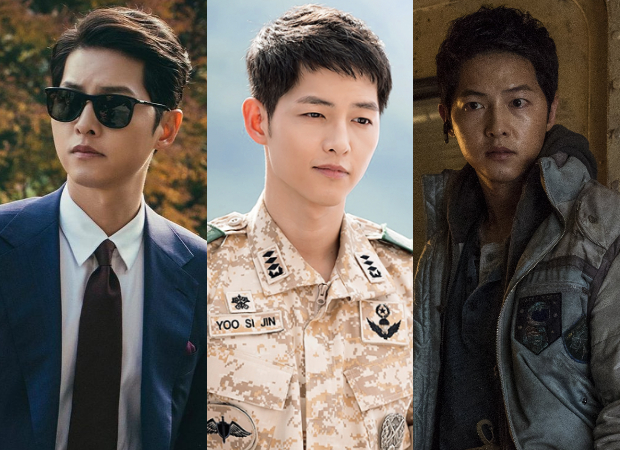 Below are listed some of the best dramas and movies of the actor to watch out for!

The 2021 released law-comedy-crime drama stars Song Joong Ki as Vincenzo Cassano, a South Korean-born mafia lawyer in Italy who flees to his homeland after he finds himself caught in between two warring factions, where he meets and falls in love with Hong Cha Young, a dedicated lawyer, who also becomes his one reason to stay in the countryand give an unrivaled conglomerate a taste of its own medicine with a side of justice. The drama also co-stars Jeon Yeo Bin and Ok Taecyeon.

The 2019 supernatural drama released in three parts. It stars Song Joong Ki, and his Descendants of the Sun co-star, Kim Ji Won. The series, set in the historical times, finds the lead characters in the mythical land of Arth as they fight and struggle to find unity among their respective tribes at the cusp of a new civilization’s birth.

DESCENDANTS OF THE SUN

The list won’t be complete without the 2016 hit army-romance drama, Descendants of the Sun. It is a love story that develops between a surgeon and a Special Forces officer. Kang Mo Yeon is a pretty and assertive woman who works as a cardiothoracic surgeon who isn’t afraid to admit her mistakes. Her life is forever changed when she encounters Yoo Shi Jin, the Captain and team leader of Alpha Team who cares more about protecting anybody in need of help as well as his country, even if it goes against the order of his superiors. This drama will tell of how they both bond together in a time of war and overcome the odds against them. Song Hye Kyo plays Kang Mo Yeon while Song Joong Ki plays Yoo Shi Jin. The drama co-stars Jin Goo and Kim Ji Won.

The 2012 released melodrama depicts the story of a man, Kang Ma Roo who has been betrayed by the love of his life, Han Jae Hee. Years after the incident, Ma Roo begins to live a life of self-indulgence. He sacrificed his well being for his girlfriend only to discover that she never looked back and married another man for wealth. Thus, he sets off to take revenge. And in order to execute his revenge, he romances Seo Eun-gi, a cold, business-oriented chaebol heiress who also happens to be the daughter of the man Jae-hee married. The drama also stars Moon Chae Won and Park Shi Yeon in the lead roles.

The 2010 historical drama is set in an era where women can’t be educated. Kim Yun Hee is a smart, responsible young woman with an independent drive; since her father passed away she has worked to support her family, but also managed to do well in her studies. Her younger brother’s illness worsens and their family is in danger of being evicted from their house for lack of money. In her desperation to support him, Kim Yoon Hee decides to take the men’s only national exam under her younger brother’s name and disguises herself as a boy. On the day of the exam, Kim Yun Hee meets Lee SeonJoon and becomes friends. Lee Seon Joon comes from a privileged background and also possesses good looks. He is also arrogant. They both pass the national exam and she has to share a room together with him at Sungkyunkwan University, while hiding her true nature. There, she becomes friends with the playboy Goo Yong Ha and rebellious Moon Jae Shin. Song Joong Ki plays the role of Gu Yong-ha, an upperclassman at the organization. The drama co-stars Park Min Young, Park Yoo Chun and Yoo Ah In.

The 2012 released supernatural fantasy romance movie around Sun Yi and her family who move to a small rural village and encounter a strange ‘wolf boy.’ Bothered by his wild eyes and feral behavior, Suni teaches the boy to wait patiently before a meal, put on clothes, and read and write the alphabet so that he can one day live like other human beings.Slowly, the boy begins to develop feelings for Suni, the first person to ever show him affection. Unfortunately, trouble arises for the both of them when Sun-yi’s jealous suitor brings out Cheol Su’s bestial instincts. Park Bo Young stars as the female lead.

The 2021 released sci-fi fantasy based film Space Sweepers is set in 2092 where the Earth has become nearly uninhabitable. The human race is now divided between the privileged who live in a pristine habitat located between the Earth and the moon, and those who are left to fend for themselves on the ruined planet. The crew of the junk collector ship, The Victory, travels throughout space looking for saleable garbage. With heavy competition from other junk collector ships, speed is the key to beating their rivals from other nations. When they come across a space shuttle containing a seven-year-old girl, named Dorothythat’s known to be a weapon of mass destruction and is wanted the privileged peers. In exchange for some much-needed cash, they agree to hold the girl to ransom but end up getting more than they bargained for. The film co-stars Kim Tae Ri, Jin Sun Kyu and Yoo Hai Jin.

While one waits for Song Joong Ki’s next projects, he is gearing up for his roles in the film Bogotá and the drama Chaebol Family’s Youngest Son.

Meanwhile, Song Joong Ki with Park So Dam will be seen hosting the opening ceremony of the 26th Busan International Film Festival, which will be held in October this year.