Please Like Us!!!
DesiGoogly > Lady Gaga stuns at the premiere of House of Gucci in a violet cape gown

Lady Gaga is a woman of sheer style and unmatched fashion. She adds a dash of her personal style and quirk to every outfit she wears. Lady Gaga is setting standards high as she has been serving looks ever since she touched down in New York. She has been seen donning puffy sleeves, OTT prints, track suits, midi dresses, pencil skirts and her all-time favourite quirky, statement sky high heels. Lady Gaga’s obsession with heels is never ending. 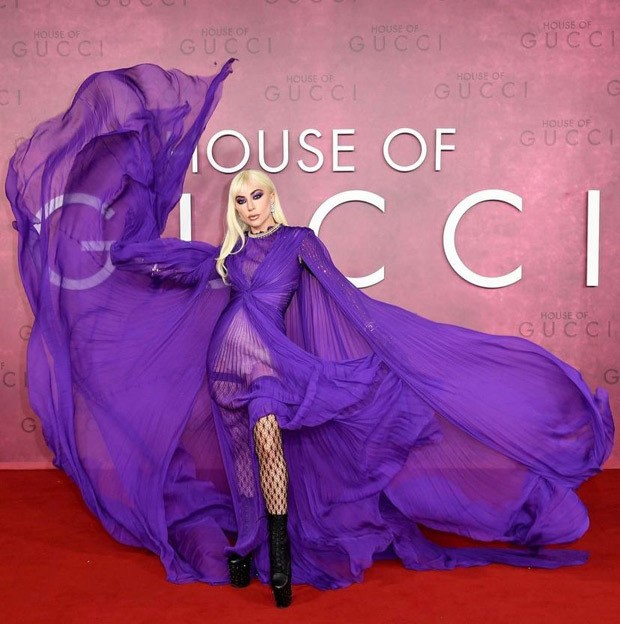 The movie House Of Gucci has been making headlines even before it has been released. Unsurprisingly so, when the movie dwells around the makings of one of the biggest luxury fashion houses in the world, the style quotient could only be through the roof. Lady Gaga who stars in the film attended its premiere in London. Lady Gaga was seen in a deep violet flowy, sheer, over the top Gucci dress. The sheer violet silk chiffon pleated cape gown was a show stealer. She paired it with patterned tights and lace up boots. Her makeup was just as beautiful with sparkly purple lids and glossy lips, hair styled in curls and a stunning fringe.

In a new interview, it was revealed that Grimes will be featured on Lady Gaga’s upcoming Chromatica remix album. Lady Gaga released, ‘Born This Way: The Tenth Anniversary Edition’ which features all of the 14 tracks of her sophomore album with six alternate versions of songs reimagined by LGBTQIA+ artists and advocates. She also postponed her ‘Chromatica Ball’ tour till 2022 for the second time.