Please Like Us!!!
DesiGoogly > Kriti Sanon who will be essaying the role of Sita in Adipurush spotted with a book on Ramayana from Sita’s point of view

Kriti Sanon seems to be preparing for her next film shoot, Adipurush, in which she will be seen playing the role of Goddess Sita. The actress just returned from Arunachal Pradesh where she was shooting for her film with Varun Dhawan, Bhediya. The actress recently posted about wrapping the film and was spotted at the Mumbai airport as she came back home. 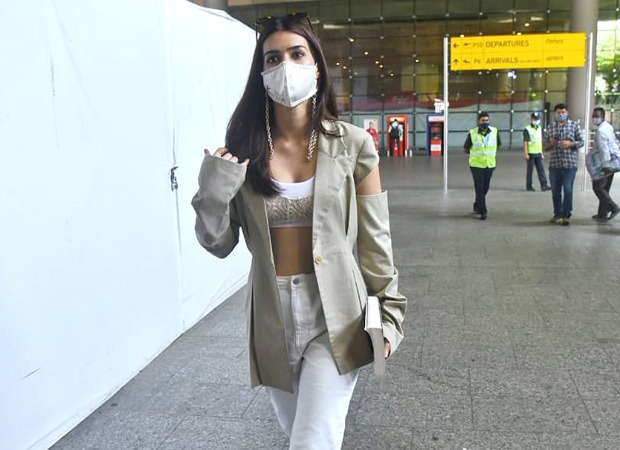 At the airport, she was spotted carrying a book titled, “The Forest of Enchantments” which is The Ramayana from Sita’s point of view.

The Adipurush crew wrote, “She’s preparing her best with detail studying about goddess SITA MATA, the book @kritisanon is carrying “Sitayan” (The Forest Of Enchantments) She gonna Nail this Mega Iconic character in #Adipurush ❤#Prabhas @omraut”

Seems like the actress has already started prep for her next while she was still on a flight back to the city, after the wrap of her last, Bhediya leaving no time for a break at all. She looked chic as ever in a white trouser and blouse set topped with a beige blazer and white pumps.

With Bhediya wrapped, the actress has multiple other films in her bag including Adipurush with Prabhas as Sita, Bachchan Pandey, Mimi, Ganpath, Hum Do Hamaare Do along with another unannounced film.