Please Like Us!!!
DesiGoogly > Kareena Kapoor Khan shares a glimpse of the Ganesh Chathurthi celebrations at her home with Saif Ali Khan and Taimur

Today on 10th September 2021, the nation and the world welcomed the almighty Ganpati Bappa with lots of enthusiasm, love and honour. Well, our Bollywood celebrities are also not back when it comes to welcoming and celebrating Ganesh Chathurthi’s arrival. One such is Kareena Kapoor Khan who’s been a religious worshiper of Bappa and has a record of bringing the Lord Ganesha’s idol home every year. 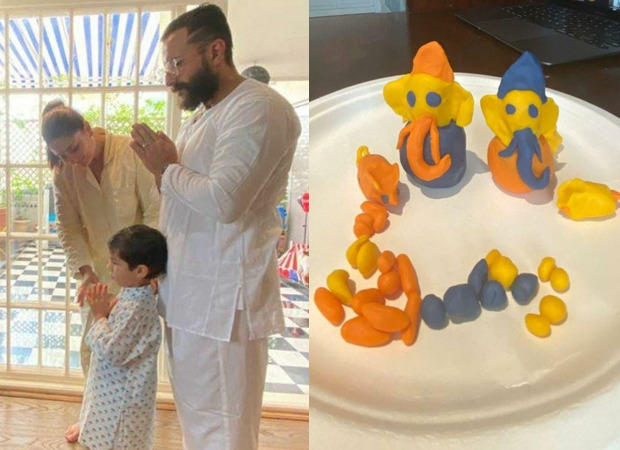 In her latest Instagram post, the actress gave a glimpse of how she celebrated Ganesh Chathurthi this year. Bebo shared a couple of images in which the first picture had Saif Ali Khan and Taimur Ali Khan standing in front of an idol of Lord Ganesha with folded hands while Kareena Kapoor gazing at Taimur with a wide smile. While Kareena’s younger son Jahangir was missing from the frame. For the celebrations, Saif Ali Khan opted for a white kurta-pyjama, While Kareena wore yellow Chinkari loungewear and Taimur sported a white and blue printed kurta-pyjama set. The other pictures had little Taimur’s creative efforts as he made Lord Ganesha’s idol from various colours of clays.

On the work front, Kareena Kapoor Khan will be next seen in Aamir Khan starrer Laal Singh Chaddha, which is a remake of the 1994 film Forrest Gump.