Following the teaser drop of their much-anticipated debut mini album’s title track ‘Savage’ a day before, South Korean girl group aespa is proving nothing but its growth and dominance with every comeback.  The album dropped on October 5 accompanied by the music video. 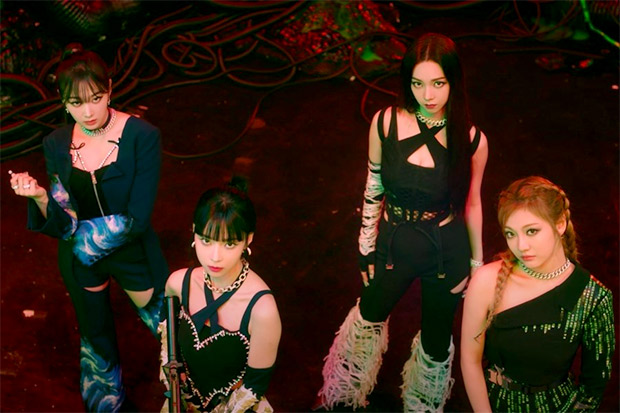 aespa keeps proving their unmatched power as a rookie group, following the massive success of their single ‘Next Level’ on charts. ‘Savage’ is on the next level as well. Directed with magical fantasy backdrop, the aespa members stun with their visuals and choreography.  The music video also shows tries to connect with different storyline of aespa universe, as in various stills the ‘Black Mamba’ can be seen taking its place.

Set in the futuristic theme, be it melody or the music video, the track gives the powerful vibes. With each aespa members have their own realm; they use magical elements to show their powers and dominance. The lyrics of the track emphasizes about wanting to destroy someone with your savage nature. In continuation to their previous songs, ‘Savage’ follows aespa’s unique storyline and tells the story of how aespa and their avatars “ae” receive the help of “naevis” and head out to “KWANGYA” to fight the villain Black Mamba.

Though the teasers did look like that the concept and genre will be dark and going to be explosive but the song seemed to be little lighter than expected but still promised to give something powerful. The concept still fits their age and given the AE concept they have the group really is trying a different song flow & not something that you can just memorize in a day because each part change melody and only chorus repeats.

‘Savage’ is aespa’s third release of 2021, following their viral May hit ‘Next Level’ and February single ‘Forever’. The former was a rework of A$ton Wyld’s song of the same name from the soundtrack of Fast & Furious Presents: Hobbs & Shaw. Meanwhile, ‘Forever’ was a cover of Yoo Young-jin’s 2000 holiday song of the same title

‘Savage’ also leaves no crumbs when talked about the member Winter’s rapping skills from the track. However, fans are also pleased with Giselle for having more lines than usual. Talking about the powerful high notes, SM entertainment sure does know the job.  Ningning’s high notes in the verses also make the ‘Savage’ just more savage.

The choreography of the song also matches the energy of the track though Karina in the center never disappoints. The MV is made even more attractive and catchy as for the first time, AESPA’s fandom name-“naevis” makes its own place with lyrics going- You are the one who protected me when I was in trouble/My naevis, we love you/

‘Savage’ being a track with a trap genre led by an aggressive drum beat and bass line, the choreography and members lineup also makes the track more aggressive and badass. Another aspect of the start of the song can also be depicted as the consistency of the aespa’s title tracks as they always begin with “I’m“. As noted in song, ‘Black Mamba’ which begins with “I’m addicted,” while ‘Next Level’ also starts with “I’m on the next level.” Following the same now ‘Savage’ also begins with “I’m a killa.”

Aside from ‘Savage’, aespa’s new mini-album also features five other songs. They include collaboration with American singer Hayley Kiyoko, who is credited as a composer for closing track ‘Lucid Dream’, as well as ‘Yeppi Yeppi’, co-written and -composed by South Korean singer-songwriter.