Please Like Us!!!
DesiGoogly > Jun Ji Hyun and Ju Ji Hoon’s Jirisan offers an abundance of mystery, mountains and cliffhangers

South Korean drama Jirisan marks the returns of Jun Ji Hyun to the small screen. We also get to see her pairing with Ju Ji Hoon once again after the horror-thriller series Kingdom. The drama has been surrounded with great hype since the time the first poster was released. Jirisan, also known as Cliffhanger, is a story about the mountain rangers at the Jirisan National Park. The drama borrows its Korean title from the eponymous mountain in South Korea. The drama takes us through the challenges faced by the team, and also casts light on their personal stories. Jirisan premiered on October 23, 2021 and gained highest viewer ratings for a weekend drama aired on channel TVN. Each episode clocks to almost 90 minutes of runtime. 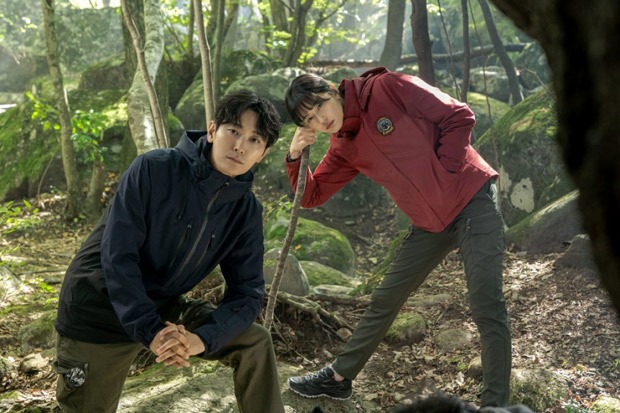 Before Jirisan episode 3 airs tonight, let’s take a quick look at what transpired so far in the lives of the mountain rangers’ team at Jirisan National Park.

Introduction to Mount Jirisan and the characters

Episode 1 of Jirisan begins with a booming narrative voice walking the viewers through the legend of Mount Jiri. The mountain is considered as a deity, and people go there to seek blessings and find hope. Several images from the past eras are shown on screen, which create a mystic aura around the tale of hope and despair. The scene cuts to the year 2018, where the story actually begins. The first episode of Jirisan served as an introduction to each character, Ji JiHoon’s character Kang Hyun Jo is the ‘newbie’ who is thrust into action even before he can finish introducing himself on the first day at work. Jun Ji Hyun’s character Seo Yi Gang is introduced in a stylish and thrilling moment where she climbs down the mountain amidst all the chaos and saves a fellow mountain-ranger from near death.

One by one, we are introduced to the team members as they engage in their banter. The supporting cast of Jirisan boasts several popular names such as Oh Jung Se, Sung Dong Il, Jo Han Cheol, Go Min Si, and Joo Min Kyung who are shown working with Seo Yi Gang and Kang Hyun Jo at the Haedong Branch and Bidam Shelter of the Jirisan National Park team. The story moves back and forth from 2018 to 2020 as it further develops. Kang Hyun Jo and Seo Yi Gang ease into a relationship of trust and comradeship, thus becoming each other’s confidantes.

Kang Hyun Jo has an air of mystery and intrigue around him. This is because he is shown to have some ‘visions’ about the lost souls in Mount Jiri. These ‘visions’ are not explained further, and the mystery continues to hold throughout the second episode. At the end of episode one, it is revealed that he and Seo Yi Gang were in a near-fatal accident. They managed to survive, but he has been in a coma since and Seo Yi Gang has lost her ability to walk. 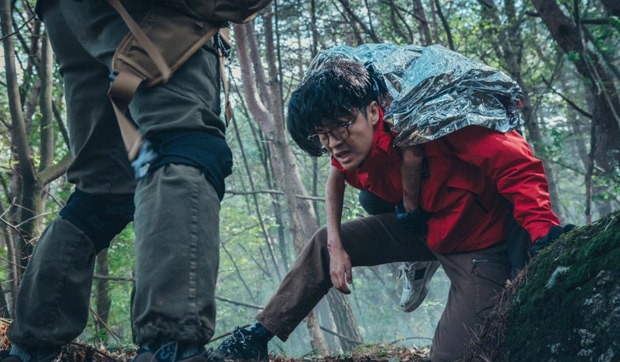 Soon there is a shadow of doubt and mystery around Song Dong Il’s character Jo Dae Jin, the chief at the Haedong Branch. It is revealed that there is an unknown person in the mountains who might be responsible for the death of certain hikers. Since then, Jo Dae Jin was shown in a different light. He has now come under suspicion in the eyes of the viewers, and soon even Seo Yi Gang’s as seen in the final moments of episode 2.

The landscapes shown in the show are breath-taking. The 360* shot of Kang Hyun Jo atop the peak of Jirisan, the dreamy sunsets and time lapse shots are delightful to watch. For the uninitiated, it is the tallest mountain in South Korea mainland. There are several legends surrounding Mount Jiri, and it is often worshipped by the locals. Since the ancient ages, Mount Jiri has been seen as a strong and protective force which holds its shares of miracles and mysteries.

In the first episode, there is a short scene where Haedong Branch receives a phone call in the middle of the night. Since the team was actively searching for a missing teenager then, any phone call can bring in new information. But it turns out, it was just a bunch of people betting on the actual height of Mount Jiri. Being in close service to the mountains, national parks have to deal with all sorts of people, be it drunk callers or illegal hikers. This side of the job often gets shadowed behind the sparkling aspect of scaling the mountains and being closer to the nature. 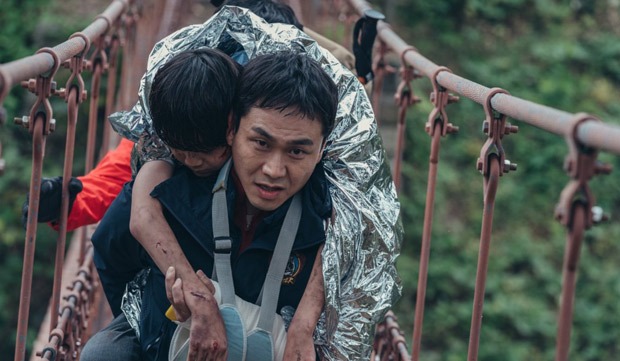 There are all sorts of hikers on any trail, and the makers have shown efforts to begin portraying some of them from episode 2. Within the huge pool of the main story, there are pockets of small side stories, like hikers stealing plants from the forests, or entering restricted areas to get hold of a lost lottery ticket. It also showed the less thrilling side of being a mountain ranger, which is keeping logs and records of all activities. Seo Yi Gang, who is dubbed as ‘Demon Seo’ for her cold attitude and hard as nail personality, is a stickler for cleanliness and detailed records. Upon her return to the mountain ranger office, she brings all the files and cabinets in order. This act of hers earns her compliments from her team members who are amazed by her eye for detail. 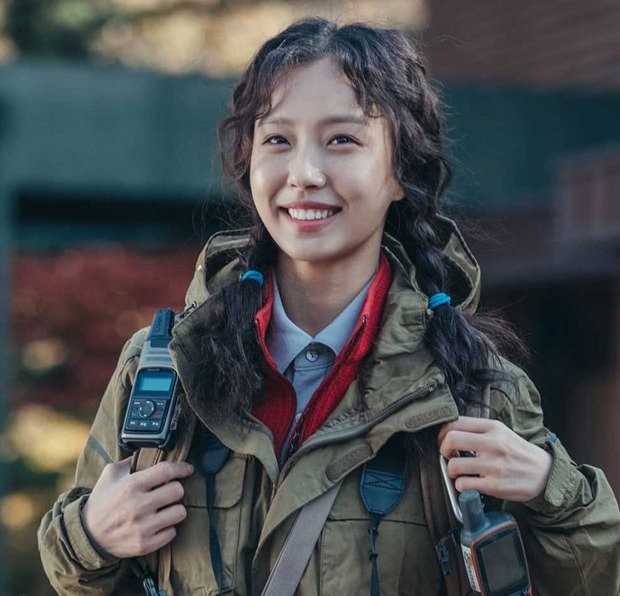 True to its global title, Cliffhanger, the drama has left viewers on not one but two cliffhangers after episode 2. First is the mysterious hooded figure that Lee Da Won (played by Go Min Si) encounters during the patrol. The hooded figure is dressed in a muddy cloak, and the shoes are also dripping wet. Only eyes of the hooded figure are shown in a flash, but it might lead the viewers to think that this mysterious hooded figure is the spirit of Kang Hyun Jo who has been looking out for the lost hikers and sending signals. Another cliffhanger is the bag of bloodied yellow ribbons found in Jo DaeJin’s drawer. These yellow ribbons are closely connected to not one but two cases, and finding them in the chief’s cabinet, tucked away from sight, is definitely raising several questions. What remains to be seen is how Jo Dae Jin is involved in all of this, and what or who is the hooded figure that Lee Da Won encountered? If it is truly Kang Hyun Jo’s spirit, then it certainly leads the story in a new direction, which is much more than just a bunch of mountaineering tales. Whatever the revelations are, they are going to be shocking that’s for sure. 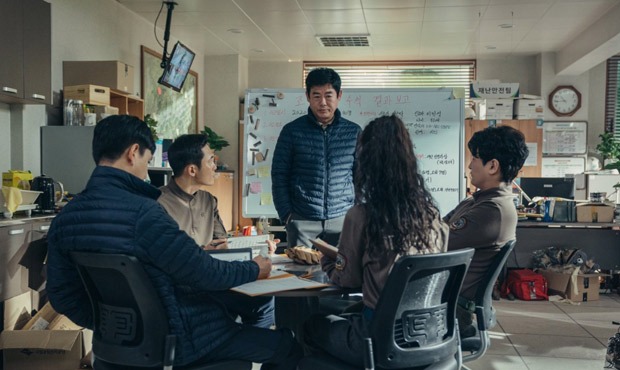 What to expect from the drama Jirisan?

The makers have used CGI for several bits, and have used real locations for some. Episode 1 was confusing initially, and it had a few shaky moments as well. But these were taken care of in the next episode, and the layout was much cleaner, and steadier. Certain scenes felt stretched beyond a desired limit, and the use of horror music felt a little overdone, but overall, the show has managedto pique interest of the viewers with its delightful tale of mountaineering and fantasy. The background music is thrown in to deepen the impact of story-telling, often times hinting at the outcome of an ongoing conversation. If the first two episodes of Jirisanare anything to go by, then each weekend for the next few weeks lookspromising, with an appetizer service of several cliffhangers and thrilling tales served along a side dish of fantasy.