Please Like Us!!!
DesiGoogly > Immerse into the world of art, food and comedy with Dali and the Cocky Prince starring Kim Min Jae and Park Gyu Young

Dali and the Cocky Prince is the newest addition to the wall of delightful Korean dramas. It has caught attention since the posters were released, owing to the quirky looking character details. The drama premiered on September 22, 2021. Park Gyu Young and Kim Min Jae star as the leads Kim Da Li and Jin Moo Hak in Dali and the Cocky Prince. Park Gyu Young was recently seen in the drama The Devil Judge. Kim Min Jae was last seen in the drama Do You Like Brahms? The two have been paired up for the first time, and the makers did the right choice. The lead duo shows a perfect onscreen chemistry and the scenes feel natural when they are on screen. 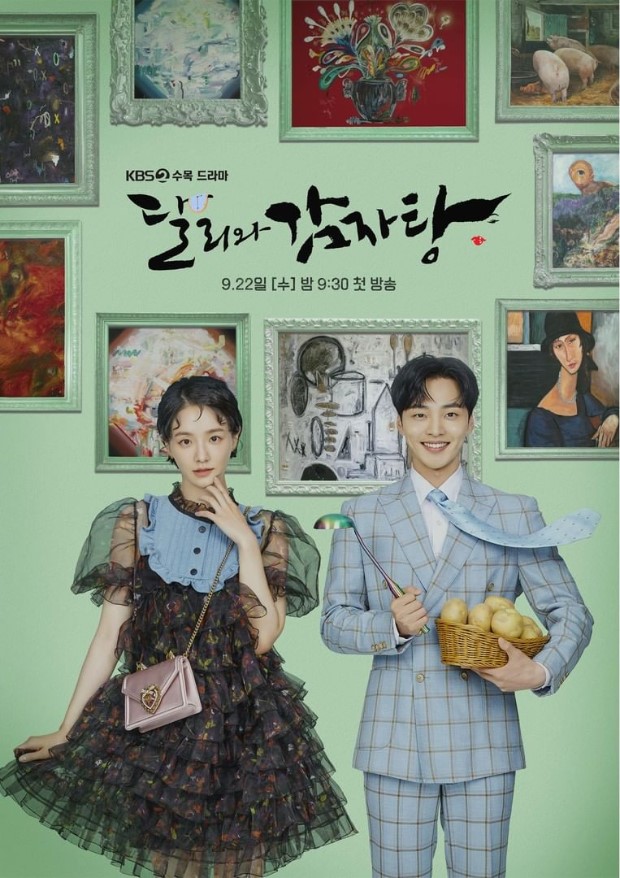 Dali and the Cocky Prince’s Korean title translates to Da Li and Gamjatang. Now, Gamjatang is a Korean curry delicacy made from potatoes and meat, among other ingredients. We also find Kim Min Jae holding a pot of potatoes and a ladle in one of the character promo posters. That poster is a direct nod to his onscreen character who is an expert at cooking, along with being a smart businessman. The female lead Kim Da Li gets her name from the famous surrealist painter Salvador Dali. Coming from a family that has appreciated art and also owns an art museum, her eccentric name comes as a small surprise.  The title plays at the amalgamation of food and art, that would take place as the story further develops. The drama boasts of magnificent art and enticing food, and its title is a straight reference to the delectable visuals one can expect in the drama.

On one hand, we have Kim Da Li who is nothing short of an art prodigy, and on the other hand, we have Jin Moo Hak, the loud-mouthed director of a food chain business. The said food chain business has risen from being a small Gamjatang restaurant to a huge conglomerate. The Jin family is what one can call ‘new money’. Da Li is well-versed and very much immersed in the world of art, pursuing her research at the Saint Müller Museum in the Netherlands. The characters are adorable in their own right, Da Li is smart but also a little naïve, and Moo Hak comes across as a show-off, but is a cinnamon roll from the inside. Speaking of Netherlands, the picturesque European city has served as the meet-cute location for our leads. Both our leads are introduced using the themes of food and art, and it also provides glimpses into their on-screen personalities.

Coming to the color palette, the show boasts of a bright visual treat. Right from the costumes, to the architecture, the makers have gone to an extra length to present a delightful feast for the viewers’ eyes. The frames exude beauty, money, and elite feel right from the first minute. The scene editing did feel choppy at certain places, especially the one where Da Li’s father is in a meeting with Jin Ki Chul, Moo Hak’s stepbrother. Da Li’s father goes out to meet his nephew, and suddenly we are brought to a scene where Ki Chul is sweating profusely after having witnessed something heinous happening between them.

This brings us to the element of mystery in the drama. Da Li’s father was hale and hearty one day, and suddenly we find out that he has passed away. His death is a mystery and his nephew has a pivotal role to play there. Da Li’s father sudden demise propels the story further ahead, developing more ground for our leads to interact, but this time back in their homeland South Korea. It also gives the audience something more to look forward to, in addition to the chemistry developing between our adorable leads. There’s also some history between Jang Tae Jin and Da Li, as it was hinted that they were supposed to get married, but eventually didn’t. We are also introduced to several other equally quirky and head-strong supporting characters who are close to the leads.

Lastly, no drama is complete without a dashing share of OST, and Dali and the Cocky Prince is no less. Suiting to the theme of food, art, and love, the drama showcased its first OST ‘The Sweetest Love’ sung by Ham Yon Ji. The song fits the budding love story between the leads perfectly. It is sweet, it is quirky, and it captures the innocence of the story.

Episode 2 of Dali and the Cocky Prince left the audience with much to look forward to on several fronts. There will be romantic development between the leads, ofcourse with a touch of humour and flair. The preview shows Moo Hak in a dilemma of not falling for a person who is also your debtor, and then we have Da Li is who is sweet as ever with her approach. There is also more to see as to what the future holds for the Cheongsang Museum of Art.

Overall, Dali and the Cocky Prince is a delightful drama. The story holds the promise of good chemistry between the leads, and ample progression points to keep the viewers hooked.