Please Like Us!!!
DesiGoogly > Halsey looks like a Greek Goddess as she shows off her gold eyeshadow in latest pictures

Halsey gave birth to her daughter Ender Ridley Aydin who she shares with her screenwriter boyfriend Alev Aydin. For breastfeeding week, Halsey also posted a tribute to all breastfeeding mothers with a picture of her and her daughter. 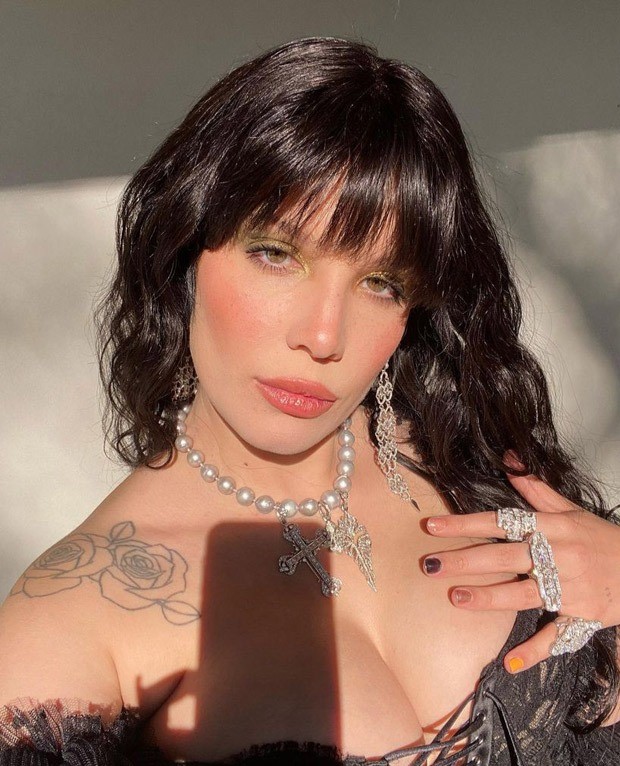 Recently, she dropped snaps of herself dressed in an all black lacy outfit with a corset fit, criss cross front. Halsey flaunts her shimmery golden eyeshadow with glossy lips and heavy diamond jewellery  with a Pearl chain. We love this look on Halsey as she pulls off the bold makeup with wavy hair and a fringe.

Halsey dropped another obsessive Trent Reznor/Atticus Ross-produced track in the latest thrilling trailer for the singer’s upcoming IMAX film If I Can’t Have Love, I Want Power.

The ‘Be Kind’ singer announced her pregnancy earlier this year and since then has been blessing fans with her pictures on instagram.

Halsey recently spoke about her miscarriage and her dealing with endometriosis and her struggle. She spoke to Rolling Stones about how she wants to focus on having a child and other things including her third album can wait. She was spotted with her boyfriend out and about wearing a ring that sparked engagement rumours.