Please Like Us!!!
DesiGoogly > From NCT 127, aespa to EPIK HIGH, Somi and Ailee, here’s a round-up of Korean music releases in October 2021

The month of October is dubbed as the month of spooky treats, and K-Pop did give us some. With Aespa’s ‘Savage’ to KINGDOM’s ‘Black Crown’, there were some tracks which suited the overall vibe that October brings along. Even then there were some groovy and funky beats that can anyone get up and dance like SEVENTEEN’s ‘Rock with you’ and GOT7’s Youngjae’s ‘Vibin’. The October also gave us some powerful tracks like NCT 127’s ‘Favorite (Vampire)’, CL’s ‘Tie A Cherry’, EPIK HIGH’s ‘FACE ID’, and SUNMI’s ‘Go or Stop?’s. 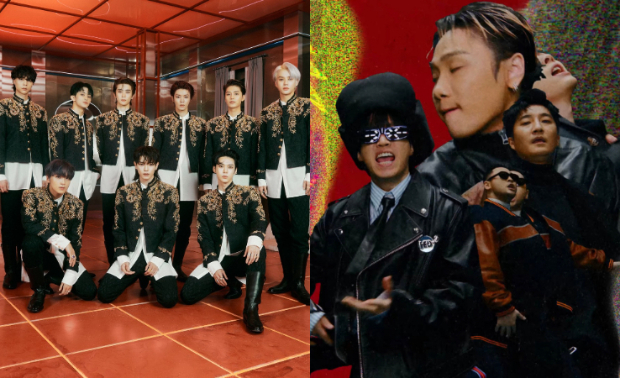 Let’s take a look at some of the wonderful Korean song releases from the month of October.

The group released the repackaged version of their recently-released third studio album ‘Sticker’ with ‘Favourite (Vampire)’ as the title track, accompanied by a stunning music video. It is a R&B pop dance track love song which can be characterized by its signature whistle sound and rich harmonies. The lyrics of the track dramatically portray the message that their lover is their everything and makes them happy, even when the relationship is heading towards a tragic end.

aespa continues their voyage in Kwangya with ‘Savage’. The song is filled to the brim with electronic music and synth-bass beats. Hip-hop and rap are paired up perfectly for a sassy song like Savage. The quartet transform into cartoon characters for a while as well. The music video takes the Kwangya story ahead, but also leaves a new question in its wake.

WOODZ’s ‘Waiting’ is a song that will make you bop to the beats. The song, despite the portrayal of despair and sadness, is a groovy number. He plays with the vocal verses and delivers a sad pop anthem.

‘Veni Vidi Vici’ is a powerful track through and through. The trap beats, paired with semi-electric music create an aura of triumph and success. The lyrics point out the negative behaviour from others and give a hard-hitting reply. Picking up the Latin phrase which means ‘I Came, I saw and I conquered’, Cravity makes an apt representation.

Sunmi’s delves into the techno genre with her latest Go or Stop? Her rich vocals can easily entrance the listener, add to it these techno beats, and there is no coming back from that feeling. Go or Stop? feels as if it ended quickly because once you hear it, it will leave you wanting for more.

AILEE comes and woos audience with her retro jazzy musical offering. The music video is as vibrant as the song. Don’t Teach Me is a song about unapologetic self love. The upbeat music is highly accentuated with the saxophone. Don’t Teach Me is a complete visual and auditory treat!

When the title itself feels like something out of a fantasy world, how can the music video be far behind? IU delivers yet another lovable romantic number with Strawberry Moon. Listening to song, one is easily transported to a fantasy land where everything is just how one wishes.

CL is a strong and powerful artist, as we know. She has carved her own niche in the hiphop world, and her latest music Tie A Cherry is only testament further to her reputation. The song is unapologetic and advocates self love. The rap verse is in a league of its own, and if you are a fan of hip hop and rap genres, then this song is a must have in your playlist!

CNBLUE opt for a retro theme for their latest comeback song Love Cut. The song uses retro music and acoustic guitar to give it a cinematic feel. The song is about cutting off a toxic love, but the beats are just so groovy that one cannot help but dance to a beat or two. CNBLUE members dressed in cowboy costumes exude a rich visual treat in the music video.

KINGDOM paints a fantastical picture of power, battle and claiming one’s destiny. The song speaks about the area that is beyond simply good and evil, about something that is beyond comprehension. The choir music like tunes, clubbed with the deeper piano tunes cast a mystical glow in the song. The vocals are harmonized matching to the upbeat gusto of the song.

EPIK HIGH’s new song is just a delight for fans all over. The song release not only brought a new addition to their discography, but it also brought along the news of EPIK HIGH’s next album which is coming soon. Face ID features three guest rappers like Sik-K GIRIBOY, and JUSTHIS. The song is abundant with rap and verses that speak truth syllable after syllable. This epic collaboration sings a song about being real in a fake world, and presents the listeners with reality bites, EPIK HIGH style.

Soloist Jeon Somi made her comeback with her first album ‘XOXO’ with 8-tracks accompanied by a magnificent music video for the title track. She talks about letting go in a break-up without hesitation. The song has been co-composed and co-arranged by $Pink Sweats.