Please Like Us!!!
DesiGoogly > First look glimpse of Pawan Kalyan in Hari Hara Veeramallu unveiled; film to release on Sankranthi 2022

On the auspicious occasion of Maha Shivaratri, the title and first look glimpse of Powerstar Pawan Kalyan’s forthcoming epic movie under the direction of Krish Jagarlamudi and production of producer AM Ratnam on Mega Surya Production banner are revealed. This magnum opus is titled Hari Hara Veeramallu and the first glimpse is extraordinary in its own way. 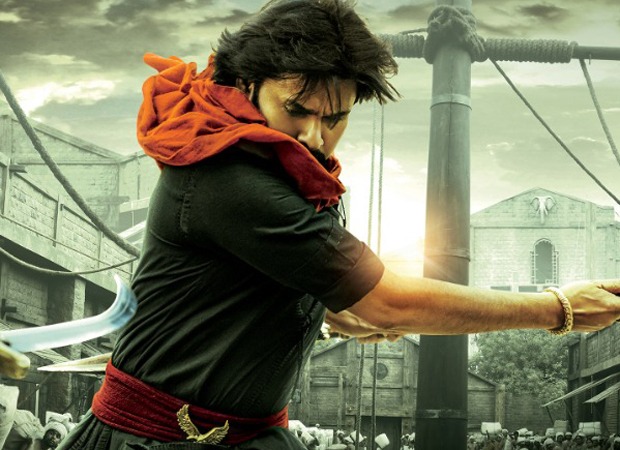 Powerstar Pawan Kalyan is essaying the title role. It’s a never before look of Pawan and crafty director Krish’s taking is superb which is terrifically complemented by Keeravani’s music and the grandeur visuals go with the flow. “This is the story of legendary heroic outlaw,” says director Krish who is a magician in this space of genres and this film will have his trademark elements. This massive film Hari Hara Veeramallu is set in the period of 17th century on the backdrop of Moghuls and Qutub Shahis era and it will offer spectacular visual feast. This is an untold story in Indian cinema and will truly be spellbound.

Prepare for the EPIC Adventure of Legendary Heroic Outlaw!????

Presenting you Power Star @PawanKalyan in & as #HariHaraVeeraMallu ????

Gigantic sets like Charminar, Red Fort and Machilipatnam port are assembled for the film’s shooting which means it is being made on a lavish budget of ₹ 150 crore with uncompromising grandeur production values.

So far Hari Hara Veeramallu has wrapped up forty percent of its shooting and the makers are hopeful to wrap it up by July and then head to the post-production works. Being a period drama film, six months’ time is dedicated for VFX and it will be supervised by Ben Lock who was associated with Hollywood films earlier.

Nidhhi Agerwal is playing the female lead. Top technicians such as MM Keeravani and ace cinematographer Gnana Shekar VS are handling music and camera respectively for this film. Also the film is being made on a pan-India level and will get a simultaneous release in Hindi, Tamil, Kannada and Malayalam languages along with Telugu. Hari Hara Veeramallu is slated for 2022 Sankranthi release.