Please Like Us!!!
DesiGoogly > EXCLUSIVE: Rashmika Mandanna on what makes Allu Arjun different- “Even if he wasn’t in the song, he’d be present for my shot”

The pan-India film Pushpa that was released on Friday in theaters across the world has taken the cinema halls by storm. The film which brings together Allu Arjun, Rashmika Mandanna, and Fahadh Faasil together for the first time has been receiving a lot of love from the audience. Before the release of the film, in an exclusive conversation with Bollywood Hungama, Rashmika Mandanna spoke about working with Allu Arjun and what made him different from the other co-stars she has worked with in the past. 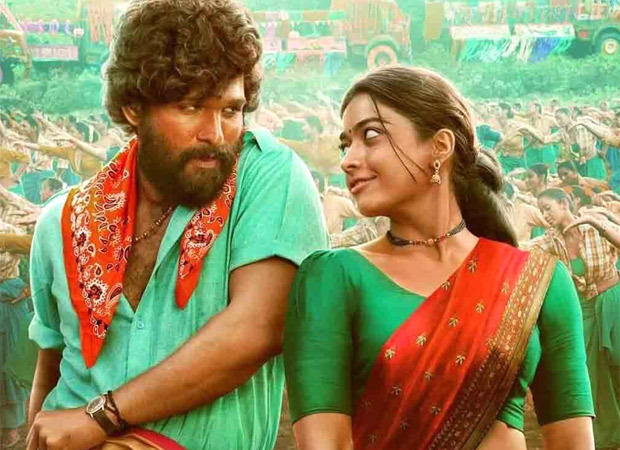 The song ‘Saami Saami’ from the film Pushpa that was released before the film’s release gave us a glimpse of the chemistry between Allu Arjun and Rashmika in the film. Talking about working with Allu Arjun and what makes him different, Rashmika shared, “I think it’s the song that I’ve worked hardest in my career. It’s the biggest also because one, I honestly could not have believed that I’ve done ‘Saami Saami’ like that. I think, Allu Arjun sir, in fact, for every frame that was on close of mine, he would sit there and tell me what he felt was right for the song and the film. So he was there. Even if he wasn’t in the song, he’d be present for my shot. He’d constantly keep telling me this works, this doesn’t work. I’ve never had this in my career. No co-actors have come and sat behind the screen while I was performing. So it was an extreme learning journey. But at the same time, it was fascinating for me to actually see something like this and which actually got me closer to Allu Arjun sir as a person.”

Recently, during a fan greet and meet event hosted by the team of Pushpa, fans created a ruckus due to which the event was eventually cancelled. Talking about Allu Arjun’s stardom, Rashmika said, “We all have been watching his brilliant work, and his films have made such big impact on all of us. And suddenly, you’re working on this film with him. So I’m like, how did this happen first. And secondly, with that comes equal responsibility. Now you have to live up to a star like that who has already achieved so much. So you have to be a good wall that he throws a ball on you, it can bounce off. He told me that my action is just my reaction. So you need to be equally good enough to give so that he can react. All the performances are mixed, it’s close-knitted.”

“I think in the whole process, somewhere in that one year, I could not have thought of him for all his work he had done all those years. I had to see him as just Pushpa. Suddenly, when I’m here promoting, and I see this massive crowd where people are breaking things, where people are hurting themselves and coming to watch just to get a sight of him; it just made me go back a step and realize that ‘Oh my god, I’m actually working with a star’. Till now you’re working with Pushpa and suddenly you’re seeing you’re here with Allu Arjun sir. So it’s very different. But at the same time, huge respect for a star like that, who is so genuine at heart, who lets you get comfortable with him and lets you learn so much from him,” Rashmika concluded.