Please Like Us!!!
DesiGoogly > EXCLUSIVE: “No character I played till today was easy. I had my own battles”- Mrunal Thakur

Mrunal Thakur who made her Hindi film debut with Love Sonia has gone on to impress the audiences with her performance in films like Batla House, Super 30, and Ghost Stories. If not for the pandemic, we would have seen her in the much-awaited film Toofaan also starring Farhan Akhtar. Currently, she has some interesting projects in the pipeline including Jersey and Aankh Micholi, all of the different genres, and cannot wait for the audiences to watch them. In a recent conversation with Bollywood Hungama, Mrunal Thakur spoke about her performances and what keeps her motivated. 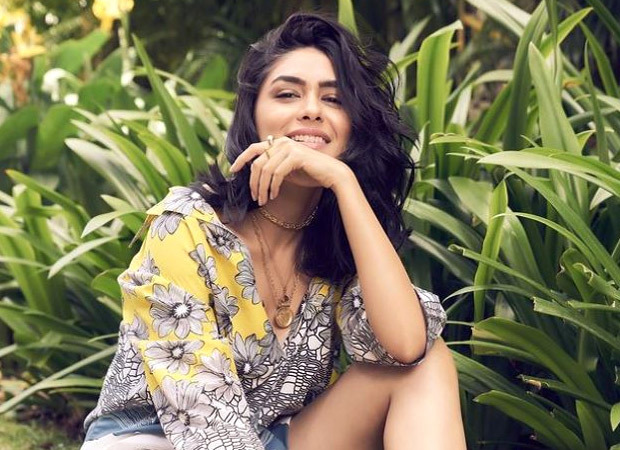 Mrunal has been a part of different genres of films and all her upcoming films also belong to varied genres. When asked which genre she finds the most difficult to crack, she said, “What I do is, I chose a character that is not easy. I like an adventure even when I do films. I want to learn something new. I want to push myself and challenge myself. No character I played till today was easy. I had my own battles. These struggles became a source of strength.”

“When it comes to Sonia (from Love Sonia) she was so vulnerable and I was so vulnerable because it was my first movie. I was so raw. I didn’t even know if I was good or not. I was just doing my job thinking that this is the last movie that I am going to be on. Or be it Batla House. I had never been a Delhi girl or Patna girl. Being a student who has always shifted from one place to another, being a daughter of a government employee, I did not gain that confidence. So I am gaining my confidence through these characters that I am playing. As much as it is difficult at the initial stage while I perform, I think the second half becomes so engaging and so fascinating that by the end of the schedule I feel like it is a 10th std farewell and I have to say goodbye to this character,” she added.

Mrunal also gives credit to her entire team who motivates her to perform when she is unable to crack certain scenes or dialogues. “I remember when I was on the set of Toofaan, there were scenes where I couldn’t even deliver my dialogues. It was difficult, it was so never wrecking. That’s where my entire team comes into the picture and plays a crucial role where they support and motivate and they always push and that’s why I would say I am blessed to have directors like Tabrez Noorani or Rakeysh Omprakash Mehra, Vikas Bahl, Nikkhil Advani, or Karan Johar. They have always pushed me to do something or the other which I have never done before in my life. I think these are the experiences I keep carrying towards my next project and allows me to surrender myself,” she further said.

In the limited number of films that she has done, she has worked with some of the finest filmmakers and co-actors. Talking about the advice she has received, Mrunal said, “I get emotionally affected really quickly. For eg. I see an accident on the street then I get affected the entire week or the day. It takes me months to get out of it. So, no matter what happens in my personal life it shows on the screen. I have realised that it should not really reflect on the screen if I am happy or unhappy. This is one piece of advice that I have received from my DoP and the second big advice from a co-actor was ‘Mrunal, be as honest as you are today and forever because in the midst of the journey where you get to be at the high and the low point people forget who we are. We lose ourselves, we lose our integrity. Sometimes there are situations where we end up doing movies for the sake of movies or we end up compromising somewhere or the other. We do films that do not have good roles because of lack of work but never do that. Never comprise, never lose yourself and always be honest to yourself’”.

Mrunal, however, has no inhibitions and is open to new possibilities and challenges. “I just want to explore and don’t want to have any inhibitions when it comes to work because people do say that, ‘hey I am going to work only with this person or I am only going to work with this genre’. I don’t have those inhibitions. I am open. I really want to surprise myself than the audience. The day I stop surprising myself I will get monotonous and I don’t want that. I get bored easily. I never want my audience to get bored because of me,” she concluded.

ALSO READ: EXCLUSIVE: Mrunal Thakur wishes to work with Shah Rukh Khan in a romantic film on the lines of films like Roja and Kal Ho Naa Ho