Please Like Us!!!
DesiGoogly > BTS reflects on gut-wrenching feeling of losing someone in emotional ‘Film Out’ music video

New music from Grammy-nominated popstars BTS is here! After a phenomenal 2020 with record-breaking songs and albums, they’ve released the track ‘Film Out’ from their upcoming Japanese album ‘BTS, THE BEST‘ which will have a compilation of their hit Japanese songs. 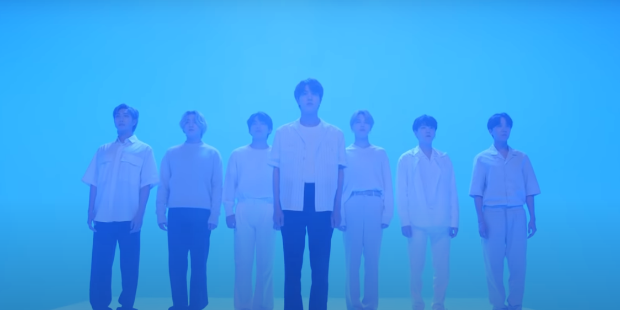 Titled ‘Film Out‘, it is a new original soundtrack in collaboration with Japanese rock band Back Number which will be used in the upcoming Japanese movie Signal which is a remake of a Korean drama with the same name. BTS has also performed the OST, ‘Don’t Leave Me’, for the series in 2018.

The music video begins with Jungkook and Jimin crooning in different rooms when Jin walks in the room and sees the members from afar. RM’s verses are chilling as recalls the wounds faced in the journey, “Decay too far gone absorbing no light or water / Sealing my wounded heart with a rootless, leafless vow/ glasses placed side by side, their role / Never fulfilled, ah, just as they were.” It does feel like they are stuck in time where Jin is reminiscing the fond memories and wants to reach out to someone. There’s back and forth between his solo scenes and the group moments including callbacks to their Korean song ‘Fake Love’ – especially the parts in the room and with an hourglass as he croons “Since you last touched them / From all the memories stored in my heart / I gather up the ones of you, link them together.”

Cut to the next part where Suga and J-Hope are seen mirroring each other in a deserted place seems like a call back to ‘Black Swan’ when Ego met Shadow. Though it is still a theory. Jimin and V harmonize together as recalling the vivid dream. The music video once again goes back and forth between how they are eager to find that “someone” and continue to wander. “The words you whisper, the resonance / Wander aimlessly around the room / The fragrance I smell, the warmth I feel / As long as it lasts, as long as it lasts.”

BTS’ Jungkook worked with Back Number’s vocalist Iyori Shimizu to create the melody for the song!  The teaser was unveiled a few days ago. The music video shows the septet – RM, Jin, Suga, J-Hope, Jimin, V, and Jungkook reminiscing about a person who never disappears from the heart and still is remembered! The lyrics reflecting the sentiments of longing for someone – “You, in my imagination / Are so vivid, As if you are right there / But I reach out my hand / And you suddenly disappear / From all the memories stored in my heart / I gather up the ones of you, link them together / Gazing at them projected across the room / I feel you with every burst of pain.”

With ‘Lights’, ‘Stay Gold’, ‘Crystal Snow’ and ‘Your Eyes Tell’, the theme has been very emotional with their Japanese songs. If one may remember, BTS’ powerful and soulful B-side track ‘Butterfly’ spoke about the fear of losing someone whereas ‘Film Out’ reflects on the gutwrenching feeling after losing someone. ‘Film Out’ captures the hard-hitting emotions about losing the sense of belonging and the rushing feel you once felt with the person you were with. The vocals are pitch-perfect along with soothing harmonies as it captures the essence of heartbreak really well.

‘BTS, THE BEST’ will release on June 16, three days after the 8th anniversary of BTS. It will additional content including behind-the-scenes and making of jacket photos, along with 23 tracks including music videos of their 6 songs in the discs – ‘Film Out’, ‘Stay Gold’, ‘Lights’, ‘Airplane pt.2′, ‘Mic Drop’ and Blood, Sweat, Tears’ Japanese versions.

Last year, BTS’ single ‘Stay Gold’ from their Japanese album ‘Map Of The Soul: 7 – The Journey’ served as an Original Sound Track for Japanese drama, Spiral Labyrinth – DNA Forensic Investigation (literal translation). The second original track ‘Your Eyes Tell’ served as an OST for a Japanese movie Kimi No Me Ga Toikakete Iru which is a remake of the Korean movie, Always. It was co-written and co-composed by the youngest member of BTS Jungkook.