Please Like Us!!!
DesiGoogly > BTS passes baton from ‘Butter’ to ‘Permission To Dance’ as the song debuts at No. 1 on Billboard Hot 100

It’s BTS vs BTS, all the way! South Korean group BTS is staying atop on the Billboard Hot 100 chart. The group released a third English track ‘Permission To Dance‘ from their ‘Butter‘ CD single on July 9, 2021. The song has debuted at No. 1 on Hot 100 replacing their second English track ‘Butter‘ which soared on top for seven consecutive weeks. ‘Butter’ takes No. 7 spot on the chart. 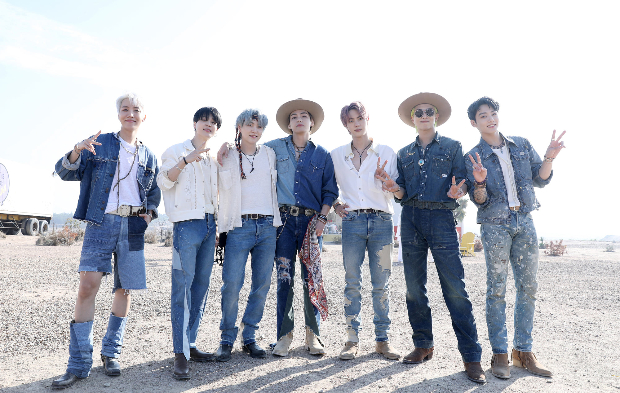 According to Billboard, “BTS has achieved its Hot 100 No. 1s over a span of 10 months and two weeks. That’s the quickest accumulation of five leaders since Michael Jackson tallied five, all from his album Bad, over nine months and two weeks in 1987-88: ‘I Just Can’t Stop Loving You’, with Siedah Garrett, ‘Bad’, ‘The Way You Make Me Feel’, ‘Man in the Mirror’ and ‘Dirty Diana’.”

That’s the quickest accumulation of five leaders since @michaeljackson tallied five over nine months and two weeks in 1987-88.

‘Permission To Dance’ earns BTS their fifth career No. 1 hit, and helps them become the first act to replace themselves at No. 1 on Hot 100 since Drake in 2018.

They’ve already achieved four No. 1 hits in less than a year with ‘Dynamite‘, then ‘Savage Love’ remix with Jawsh 685 and Jason Derulo, followed by ‘Life Goes On‘, and ‘Butter’.

Just like SUGA said last week on Weverse platform after their seventh consecutive week on Hot 100 with ‘Butter’, it’s baton touch. Like relay games, when one player passes the baton to another plan to finish the race, BTS passes the baton to themselves after grabbing another No. 1 in their impressive career.