Please Like Us!!!
DesiGoogly > BTS members are handcuffed in second concept photos ahead of ‘Butter’ CD single release on July 9

Following chart-topping second English single ‘Butter‘, South Korean juggernaut BTS is gearing up for the release of their CD single release along with a new track dropping next month. However, the group is yet to reveal the track officially but the hints suggest the song is titled ‘Permission To Dance’. After releasing the first version of concept photos, BTS has dropped the second version and they are absolutely thriving. 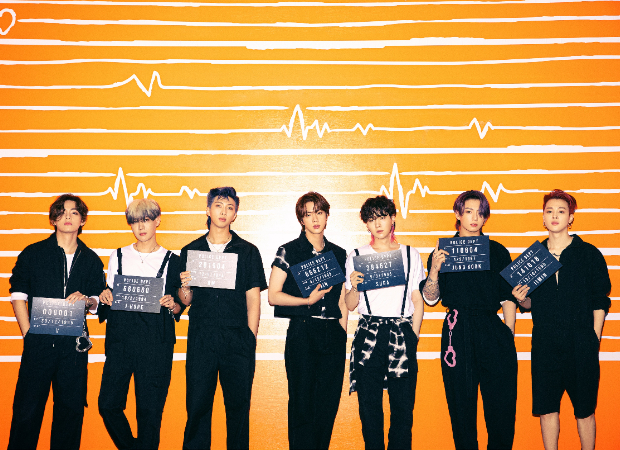 On June 28, BTS dropped series of individual concept photos along with a group photo. RM, Jimin, V, and Jungkook are seen dressed in navy blue overalls whereas Jin dons half jacket paired with white tee and denim, Suga sports a white t-shirt with navy blue pants, and J-Hope is seen a navy blue dungaree and a white tee. All seven members look fierce in the concept photos whilst holding prison boards with their date of birth written on them and several numbers. The same concept was seen in the music video as well. The highlight of the photos – heart-shaped handcuffs. BTS’ crime? Stealing ARMYs heart.

Post the song release in May 2021, BTS had done a live broadcast explaining what the numbers meant – Jin and Suga opted for random numbers. Meanwhile, J-Hope entered the numbers from the famous pager code which means ‘bbobbo (​뽀뽀) (kiss/smooch)’, RM entered the numbers which was their apartment he used to live in, Jimin penned the date of their first concert, V mentioned that “we will be No. 1” and Jungkook used the date when he first arrived in Seoul from Busan.

Meanwhile, BTS’ dance-pop anthem ‘Butter’, which released on May 21, is at No. 1 on the Hot 100 chart for a fourth consecutive week, making BTS the first Asian act in history to achieve this milestone. It becomes the group’s longest-leading No. 1 hit, surpassing the three-week run of ‘Dynamite‘. BTS has dropped one instrumental and three remixes of ‘Butter’ – Hotter Remix, followed by Sweeter and Cooler remixes. The group is basking in the glory of their latest English single ‘Butter’ which has been topping the Billboard Hot 100 charts for four consecutive weeks. ‘Butter’ single CD will be released in two versions – Peaches and Cream. The new track details are yet to be announced officially. It releases on July 9, 2021.