Please Like Us!!!
DesiGoogly > BTS’ J-Hope, Jimin and V look swoon-worthy in teaser photos ahead of ‘Butter’ on May 21

It’s safe to say that the anticipation is soaring for South Korean juggernaut BTS’ upcoming English single. The septet is set to drop their English ‘Butter‘ after topping the charts last year with their first one ‘Dynamite’ last year followed by their Korean single ‘Life Goes On‘. The month of May began with series of promo content and the excitement is unreal. 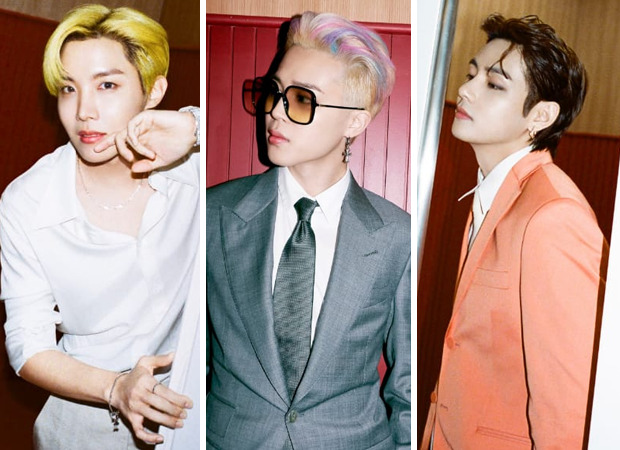 On May 13, BTS released the last three individual teaser photos featuring members J-Hope, Jimin, and V flaunting their sartorial splendor in rather sharp looks. J-Hope makes his return in a vibrant blonde look which fans haven’t seen in many years. Donning a sharp white shirt, he pairs it with Tom Ford Atticus Trousers and Audemars Piguet Royal Oak silver watch. Jimin debuts rainbow hair – with hues of pink, blue, and purple over his undercut blonde look. He dons Tom Ford Shelton Suit and pairs the outfit with Dior So Stellaire 1 Sunglasses and Chrome Hearts Tiny CH earrings. Lastly, but definitely not the least, V plays with vibrant summer colour in a custom-made Lemeteque suit, with the soft brown hairdo. All the pictures were taken in what looks like an elevator.