Please Like Us!!!
DesiGoogly > Akshay Kumar poses with choreographer Ganesh Acharya in this candid BTS picture from Bachchan Pandey

Akshay Kumar has multiple films in the pipeline, each at different stages of production. The actor had resumed shooting as soon as lockdown restrictions were eased down last year. He started the new year with the shoot Sajid Nadiadwala’s Bachchan Pandey in which he plays a gangster.

Now, we have got our hands on a BTS picture of Akshay Kumar from the sets of the film. He is seen in his look from the film in the picture, having a conversation with a team member with his arm wrapped around choreographer Ganesh Acharya. 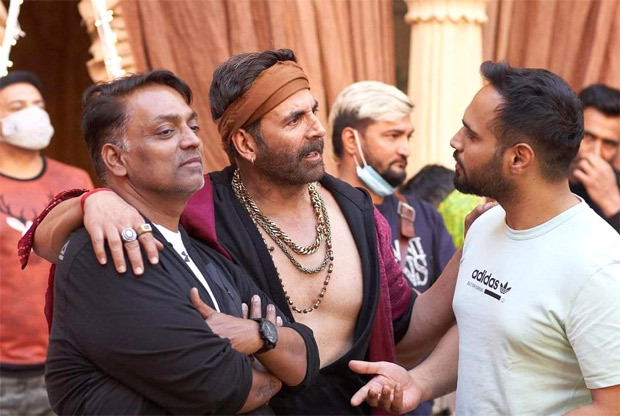 Besides Akshay Kumar, Bachchan Pandey also stars Kriti Sanon, Jacqueline Fernandez, Arshad Warsi, Pankaj Tripathi, Prateik Babbar, Abhimanyu Singh and Saharash Kumar Shukla. Directed by Farhad Samji, it is produced by Sajid Nadiadwala. Akshay’s look was revealed a day after they commenced shoot in January and his rustic avatar and cataract eye got thumbs up from everyone.

ALSO READ: Arshad Warsi shares a still from Bachchan Pandey with Akshay Kumar as he wraps up the shoot of the film