Please Like Us!!!
DesiGoogly > Ajay Devgn’s intense look from RRR revealed on his birthday

Director SS Rajamouli and his RRR team decided to unveil the first look of Ajay Devgn from the film with a motion poster on the occasion of his birthday! PEN Movies took to their social media to share a grand reveal video of the actor’s look as the man of the people who stands amidst a circle of people in an olive green bandit outfit and a belt of bullets across his chest with a white cloth wrapped around his head. 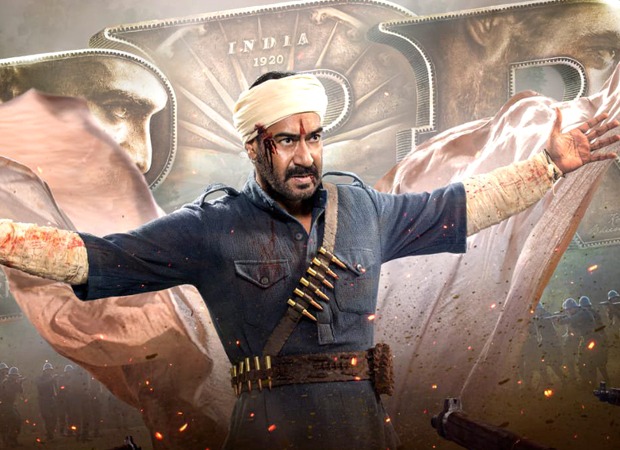 SS Rajmouli also shared the video reveal of Ajay’s look writing, “LOAD… AIM… SHOOT… He derives strength from empowering his people! Presenting @AjayDevgn from #RRRMovie.” The video ends with a birthday wish for Ajay Devgn. RRR has an ensemble cast from multiple industries and boasts of names like Ram Charan, NTR Jr along with Ajay Devgn and Alia Bhatt. The project is helmed by SS Rajamouli, who was also the mastermind behind the record breaking Baahubali series. The cinematic spectacle promises to be a record breaker and huge blockbuster in the making.

The film is a period drama like never before, a fictional take on the younger days of celebrated freedom fighters Komaram Bheem and Alluri Seetharamaraju. The much-awaited Pan-India film will have a worldwide release on October 13, 2021 on the festive occasion of Dursshera.