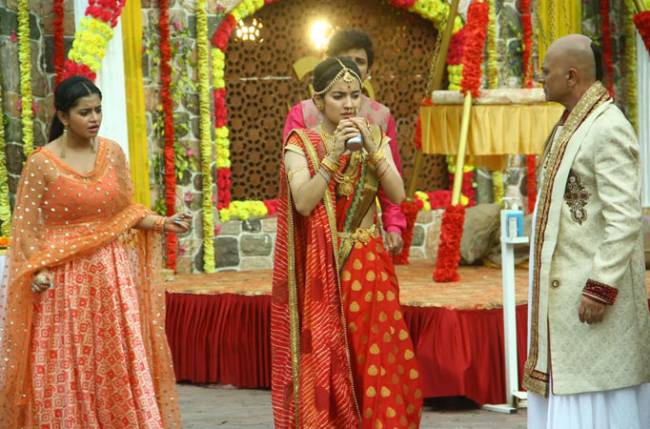 MUMBAI: With the lockdown gradually lifting and people across the country stepping out into the new normal, Zee TV resumed shoots of its popular shows and reconnected its audiences with the journeys of their beloved characters. This indeed has left all the viewers excited to watch their favourite dinner time companions on the small screen once again.  Neel (Karan Jotwani) and Chahat’s (Pratibha Ranta) dramatic yet intriguing story in Qurbaan Hua has already captivated the Zee TV audience. But looks like the viewers are in for an interesting treat as several twists and turns are set to spice up the plot of the show. While Chahat has been mostly seen abiding by the duties of a doctor, the recent track shows her as the true daughter-in-law of the Bhatt family.

Stepping up as the ideal bahu, Chahat will play an integral part in the age-old Swarn Tula custom. Widely celebrated in the northern part of India, Chahat will be seen sitting on one side of a weighing scale with Saraswati’s baby (Neel’s sister) while the entire family will fill the other side of the scale with jewellery and edible grains basis her weight. Being a pahadi girl herself, Pratibha was rather ecstatic on portraying this scene.

Talking about her experience, Pratibha Ranta shared, “The Tula Daan or Swarn Tula ceremony is a widely popular custom that we as north Indians celebrate. It is mostly a charitable event because everything that is poured into the other half of the scale to match the weight is given away to the under privileged. Until now I had only attended such functions, and this was the first time I actually participated in it. Being a Pahadi girl who hails from North India, this was quite an exciting moment for me. Since the essence of the ceremony demanded it, I was dressed in a real heavy saree which initially was slightly uncomfortable especially when I had to sit on the scale. I faced slight struggles at that time but eventually made amends with it. Being a part of this custom and having heard enough and more about ever since I was a kid, experiencing it felt really surreal. All in all, I had a lot of fun shooting for the sequence.”