One of the highly awaited comebacks in the Korean music industry is of the fourth generation group, Tomorrow X Together aka TXT. In September, it was announced that after closing The Dream Chapter series, the quintet will release their next mini-album ‘minisode1: Blue Hour’ on October 26, 2020. 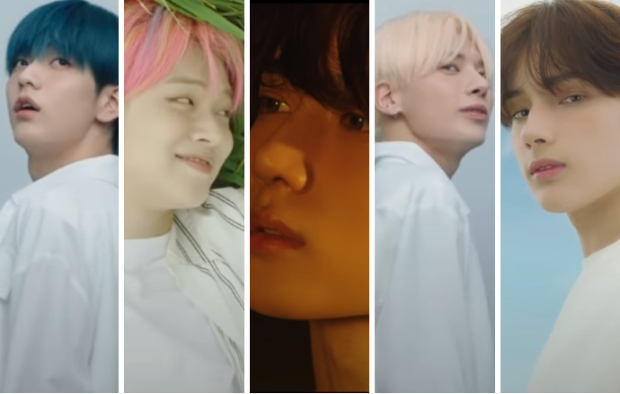 After dropping multiple group and solo concept pictures along with individual teasers, the first teaser of the music video ‘Blue Hour’ showcases the five members – Soobin, Yeonjun, Beomgyu, Taehyun, and Huening Kai – in a field enjoying the good times, playing around and having fun. Soobin and Beomgyu are sitting on a tree watching the Ferris wheel whereas Yeonjun and Huening Kai are lying on the grass on a beautiful bright day. Beomgyu is lying on the grass alongside all the members. As they are running towards the Ferris wheel, the screen cuts to Soobin and Taehyun watching the birds fly, Huening looking directly looking at the camera whereas Beomgyu staring at the Ferris wheel with a painful look in his eyes.

The lyrics reflect on how the time passes and how the quintet wants it to stop time to reminisce the magic of times. “Time please stop / Between the boundaries of the world  / I want to leave you and me behind  / At the hour/time of dog and wolf / I want to be trapped in magic,” (via TXT_sarangdan). The video ends with Yeonjun’s voice as he says ‘TOMORROW BY TOGETHER’.

The cinematography is visually so appealing and beautiful. The melody is mesmerizing which gives a vibe that it will be a soft ballad but not before it takes you through a rollercoaster of emotions like how ‘Eternally’ had done.

The quintet – Soobin, Yeonjun, Beomgyu, Taehyun, and Huening Kai – closed their album series ‘The Dream Chapter’ with their last album, ‘Eternity’. The album dropped back in May with the title track ‘Can’t You See Me’. This was followed by a B-side music video, ‘PUMA’, and the last music video, ‘Eternally’. Along with their Japanese release, they dropped their single ‘Drama’ on August 19.