After the attack, Kapil Dev continues to be in the hospital under the supervision of doctors, former cricketer Chetan Sharma shared a picture of the ace cricketer from the hospital 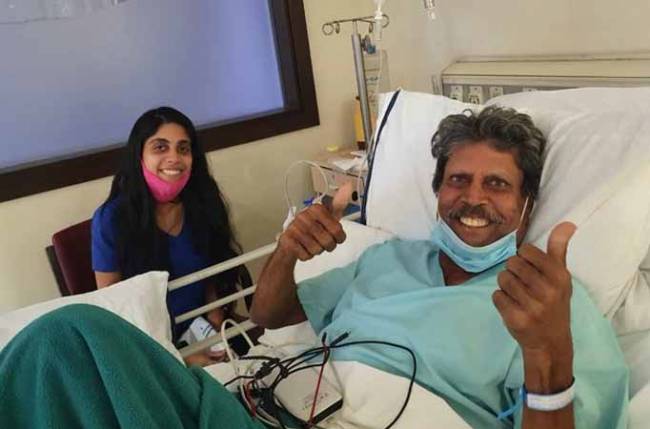 MUMBAI: Legendary cricketer Kapil Dev suffered a Heart Attack yesterday and currently he is on the road to recovery. Soon after Dev was admitted to Fortis Hospital in South Delhi, he underwent an angioplasty. Get well soon and good wishes have been pouring in ever since the news of him suffering the attack surfaced online. Dev’s friend from the different industries took to social media to pray for his recovery. As the ace cricketer continues to be in the hospital under the supervision of doctors, former cricketer Chetan Sharma shared a picture of Dev from the hospital.

Captioning the photo Sharma wrote, “Kapil Pa ji is OK now after his operation and sitting with his daughter AMYA. Jai mata [email protected]” The hospital click sees World Cup Winning captain flashing double thumbs with his daughter Amya sitting beside him. Sending out the deets of Kapil Dev’s surgery, the hospital treating him had released an official statement and said, “Kapil Dev suffered a heart attack. He was evaluated and an emergency coronary angioplasty was performed in the middle of night. Currently, he is admitted in ICU and under close supervision of Dr Atul Mathur and his team. Kapil Dev is stable now and he is expected to get discharged in a couple of days.”

ALSO READ – (Jhulan Goswami is GRATEFUL for being able to do THIS again; deets inside )

Ranveer Singh, who will portray Dev in Kabir Khan’s ’83 tweeted good wishes for the legendary. Singh tweeted, “The Legend @therealkapildev embodies strength and resilience Praying for a speedy recovery of my main man,” while Shah Rukh Khan had tweeted, “Get well sooner than soon Paaji! @therealkapildev wishing you a speedy recovery as fast as your bowling & batting. Love to you sir.”

Kapil Pa ji is OK now after his operation and sitting with his daughter AMYA. Jai mata di.@therealkapildevpic.twitter.com/K5A9eZYBDs

Last night, Kapil Dev took to social media to thank his fans for their love and support. He had Tweeted, “Thank you everyone for all the love and concern. I am overwhelmed with the good wishes and well on the road to recovery.”